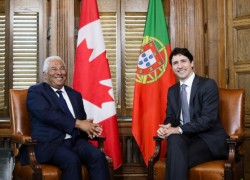 Founded in Dublin, Ireland, in 2009, the Web World Summit is considered the world’s largest technology conference.

The invitation followed the official visit of the Portuguese Prime Minister to Canada on  May 2 through May 5, with a strong emphasis on economics and Portugal’s evolving diplomatic style.

The program of the visit included stops in Ottawa, Kingston, Toronto and Montréal. The Prime Minister was accompanied by a delegation that included Vasco Cordeiro, President of the Regional Government of the Azores, and José Luís Carneiro, Portugal’s Secretary of State of Portuguese Communities Abroad.  Government officials and representatives of Portugal’s business community were also in attendance.

Meeting with Canadian governmental officials, business leaders and members of the Portuguese community, the benefits of trade between the two countries was a major theme of Prime Minister Costa’s visit as well as the emphasis on the countries’ common values and global outlooks.

The visit occurred during a period that has seen Portugal’s economy grow at its fastest rate since 2000, four years after leaving an international bailout program, and months after the provisional application of CETA, the Comprehensive Economic and Trade Agreement between Canada and the European Union.

Among the first announcements was a bilateral memorandum of understanding called the Youth Mobility Arrangement (YMA) signed on May 3. The agreement will ease work and travel regulations for Portuguese youth aged 18 to 35 through programs such as through the International Experience Canada work permit pool.

In an accompanying news release, Secretary of State José Luís Carneiro, emphasized the potential social and economic benefits of the agreement: “We hope that this instrument will ultimately contribute to bringing us closer together, while improving mutual knowledge of the existing opportunities in both our countries. I encourage our youth to take advantage of the experience that this agreement will provide, embarking on a journey that will enable them to discover different ways and traditions, increasing at the same time their personal and professional wealth,” he said

Portugal and Canada plan to sign a modernized social security agreement allowing access to benefits and pensions entitlements for people who have lived and worked in both countries. The Portuguese Prime Minister also promised to improve consular services on the last day of the state visit.

Stops in Ontario continued the business theme with Prime Minister Costa attending the official opening of fruit processing company Frulact Group’s facility in Kingston as well as events with Toronto union members and a meeting with business leaders at the Economic Club of Canada.

The tour coincided with the Dia da Língua Portuguesa e da Cultura (Portuguese Language and Culture Day), celebrated internationally on May 5. The promotion of the Portuguese language and culture also figured prominently with events at various community associations as well as the official opening of the new Centro de Língua Portuguesa (CLP)/Camões I.P. at the University of Toronto with José Luís Carneiro in attendance. The CLP spaces, provide a linguistic and cultural base in an academic setting and are located at a number of universities throughout the world.

The state visit continued to the city of Montréal with a stop at the Canadian Centre for Architecture, home to a portion of architect Álvaro Siza Vieira’s archives since 2014. The Centre, along with the Calouste Gulbenkian Foundation and the Serralves Foundation, recently launched a project to provide online access to the architect’s complete archival materials.