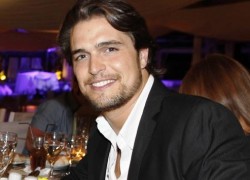 Portuguese actor Diogo Morgado is now recognized by the American people as “Jesus Christ” from his leading role in the History Channel’s miniseries The Bible, produced by Mark Burnett and Roma Downey, the most-watched program on any cable network this year.

He was chosen to play the role after an audition in Los Angeles where he performed his own version of “how Jesus would have been on Earth.”

Yet, the screen “Jesus,” has a secret that he doesn’t mind sharing – He loves Portugal!

“I’m proud of being Portuguese,” he has said; not only to a particular journalist, but in all his interviews.  After being praised for his role in The Bible, the actor used Twitter to thank the overwhelming support he got from his own people.

“I was always proud of being Portuguese. I always felt that we are worth so much more than we think we are. For the Portuguese people to feel proud of themselves, for having a Portuguese making the world talk about them, it is… rewarding.”

Raised in a religious country – about 98% is Catholic – to prepare himself for the role, Morgado read and watched everything he could to learn about the Bible, but only after a trip to Jerusalem he could understand what his role would be.

According to him, his most favorite scene is the Last Supper scene, which, as he claimed, he had “never seen being done that way before.”

Passionate about photography, before traveling to the U.S., Morgado was one of the “ambassadors” of  the “Portugal Melhor Destino”  [Portugal: Best Destination] program, a project which invited Portuguese people to take pictures of the their favorite homeland features such as food and special traditions, everything that made them feel proud of being Portuguese.

“I like to photograph people, specially portraits and scenes. In this project, I allowed myself to travel from the north to the south of Portugal, photographing Portuguese people. We should feel proud of our Portuguese spirit,” he remarked.

During five days, the breakout star of The Bible has travelled more than 1,865 miles to photograph what he has considered to be the best his country has to offer to create a video available (in Portuguese) on YouTube:

“Do you want to know why Portugal is the best destination?  We are cosmopolitan, we keep and live our traditions, and we have a fantastic weather! Each time I return to Portugal, I always feel how much I have missed it,” he said.

His commitment to the “Portugal: Best Destination” project led him to collect more than 77.000 pictures and create the World’s Largest Photo Album on record, according to the Guinness World Records.

Questioned by a Portuguese TV host about his favorite spot in Portugal, Morgado chose Praia da Fonte da Telha, a beach about 20 minutes south of Lisbon. “It is that special place where I grew up and where I reflected and took some of the most important decisions in my life.”

Following the 10-hour The Bible miniseries, released by the History Channel, the American public will enjoy watching Morgado again in two upcoming productions.

In May, he will be playing the role of a downtown NYC musician in Red Butterfly, a urban drama production directed by Jon Alston, followed by the action movie Born to Race: Fast Track.

Recently, Morgado was also the producer and director of his own short movie titled Break, available on YouTube, featuring two other Portuguese actors Lucia Moniz and Rui Unas.

Diogo Morgado, 33, is a Portuguese model and soap opera star. He was born in Lisbon but grew up in Alentejo, the south-central region of Portugal. At age 14, Morgado participated in a youth magazine talent contest and was invited back for an audition. He landed a part on a Portuguese television show at age 15.

At 21, he went to a drama school in Madrid, Spain. He has worked in television, cinema and theater ever since. In 2011, he led a role in Laços de Sangue, which won the year’s International Emmy for Best Soap Opera. Morgado’s cinema credits include the international film productions Dos Rivales Quasi Iguales (Spain) and Revelação (Brazil).

(*)Tânia Mendes has a degree in Journalism from Escola Superior de Comunicação Social – Higher School of Communications and Media Studies in Lisbon, Portugal. She had worked at marketing and public relations agencies in Portugal and as a journalist for Portuguese Media. In addition to writing and tourism marketing, she is skilled in social media and blogging. She is currently working at Louis Karno & Company, a strategic communications agency in Concord, NH, through the INOV Contacto Program. This program, managed by AICEP Portugal, provides international training for young Portuguese graduates. She enjoys traveling, social entrepreneurship and meeting people from around the world.