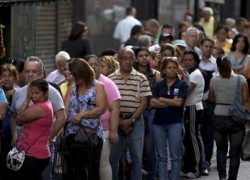 According to the Government of Madeira, in the recent months over 4,000 Portuguese of Madeiran heritage have returned home from Venezuela due to the climate of instability in the country.

The number is projected to increase exponentially in August. A great number of Portuguese families residing in Venezuela are waiting for the closing of the school year, in the end of July, to leave the country and return to Portugal. The majority of those families are originally from Madeira.

Officially, about 1,000 returnees from Venezuela have already been registered in the Madeira’s employment offices, 585 in local health centers, while 197 new pupils have registered at local schools in the last current school year.

Since early April, Venezuela has experienced a wave of violent protests against the government of President Nicolás Maduro, claiming at least 119 lives and injured thousands, according to some estimates. The escalating violence comes ahead of elections for Venezuela’s National Constituent Assembly on July 30.

Over the past couple of years the escalating crises, in what once was the richest South American country, more Venezuelans are fleeing the country as the crisis deepens and living conditions deteriorate rapidly.

Venezuela is plagued by unemployment, triple-digit inflation, food and medical shortages and a homicide rate among the highest in the world.

The Portuguese community of Venezuela, estimated at half a million, is one of the largest ethnic groups in the country. With the exception of Brazil, Venezuela has the second largest Portuguese diaspora in Latin America and fourth in The Americas.