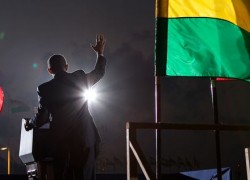 President Barack Obama will host the 1st US-Africa Leaders Summit to be held August 4-6 in the White House. Most of the 50 African countries invited will take part in the event at the highest level including heads of state. The African continent comprises of 54 sovereign states.

“We’ve received confirmation from 50 governments that they will participate in this summit [at the highest level] […] most will be heads of state,” said Assistant Secretary of State for African Affairs, Linda Thomas-Greenfield, at a news conference broadcast on video to US embassies in various African capitals.

Heads of State from Angola, Mozambique, São Tomé and Cape Verde, members of the Community of Portuguese-Language Countries (CPLP) are among the invited.

Under the theme “Investing in the Next Generation” The US-Africa summit will debate topics such as health, wildlife, energy, trade and US investments in Africa, as well as peace and security on the continent. More than 80 separate events are planned. According to Thomas-Greenfield, no bilateral meetings with President Obama are foreseen.

The first  US-Africa Leaders Summit is the largest event any US President has held with African heads of state and government.