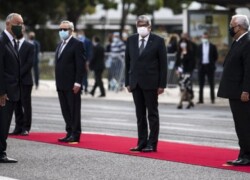 Portugal has pronounced November 2, 2020, a day of national mourning honoring victims of COVID’19.

Signed by the President, the Government decree declared “November 2, 2020 a national day of mourning to pay tribute to all the deceased, particularly the victims of the COVID’19 pandemic.”

The decree was approved by the Council of Ministers last week, at the same meeting the Government banned nonessential domestic travelling, between October 30 and November 3.

The decreed was ordained to discourage families from congregating at the cemeteries to pay tribute to their dead, on November 1st weekend, when the Portuguese celebrate Memorial Day [Dia de Todos os Santos or Dia dos Fiéis Defuntos].

“Because this is an important time of mourning in our community, it was decided to decree a day of national mourning, so that the tribute to the deceased can be paid in particular to victims of COVID’19 disease,” Minister of Health, Mariana Vieira da Silva, stated.

The ceremony consisted of the hoisting of the national flag, presided by Portugal’s head of state, the President of the Assembly of the Republic and the Prime Minister who participated on Monday morning in the ceremony. The official entities held a minute’s silence to honor the dead.

The number of infections by COVID’19 per 100,000 inhabitants almost doubled in Portugal within a week. The data is from the European Centre for Disease Prevention and Control (ECDC), which is monitoring the evolution of the crisis in the countries of Europe.