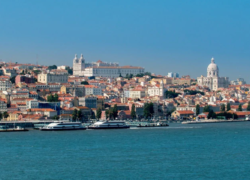 The Portuguese government has ordered new restrictive measures for the Greater Lisbon and its Metropolitan Area, in order to contain the new outbreaks of COVID’19, placing 19 parishes under a state of calamity.

It was reported that around 70% to 80% of the outbreaks have occurred in the poorer communities, around the industrial hubs of Lisbon and along Greater Lisbon shoreline, where positive cases of the virus have been in the hundreds for the past month.

Gatherings will now be limited to 10 people, down from 20 previously. No drinking in public places will be allowed and stores in these areas will have to close by 8 p.m., among other measures.Those who don’t comply will be penalized with fines.

“There will also be a greater police presence in these municipalities,” the Prime Minister warned.

Authorities have confirmed that social interactions are at the heart of some of the recent outbreaks, despite a nationwide ban on gatherings of more than 20 people.

Portugal has confirmed 6 deaths and 345 additional COVID’19 infections, on Tuesday, an increase of 0.9%.

Due to the new COVID’19 outbreaks, Portugal was barred with bans and/or restrictions to enter 17 countries in Europe.

The country has been coded in “red” in the color system that classifies the transmissibility of the virus, representing a high risk to other countries in the continent.

The new outbreaks placed Portugal among the European countries with the highest number of new cases per million inhabitants.