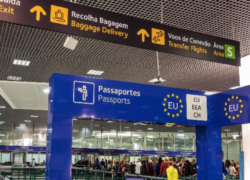 Portugal has been barred with bans and/or restrictions to enter 17 countries in Europe, due to the recent increase in domestic new infections by COVID’19, considered now to be a high-risk country by the European Union Agency for Aviation Safety.

The country has been coded in “red” in the color system that classifies the transmissibility of the virus, representing a high risk to other countries in the continent.

Once viewed and praised as an example in best practices to contain the pandemic, Portugal has now moved quickly to the list of bad examples.

Recent outbreaks have been detected, mostly the Greater Lisbon area, placing Portugal among the European countries with the highest number of new cases per million inhabitants.

In the past weeks the country has registered an average of 15 to 25 cases per 100 thousand inhabitants, a warning forcing the closing of border connections.

Countries such as United Kingdom, Norway, Iceland, Austria, Cyprus and Denmark, that reopened their borders to almost all countries of the European Union (EU), have excluded Portugal.

Lithuania, Bulgaria, Estonia, Latvia and Romania, are still allowing the entry of Portuguese visitors, while Greece and the Czech Republic are requesting that Portuguese visitors carry a diagnostic test for the viral disease, when entering the country.

As a result, the Portuguese government is considering responding with the same restrictions against the European countries that are banning or limiting the entry of Portuguese visitors on the basis of COVID’19.

The Ministry of Foreign Affairs, Augusto Santos Silva, has stated that these restrictions against Portugal “flagrantly contradict not only the spirit of solidarity between European countries, but also the decision of the European institutions to restore free movement in European space from the 15th of June “.

“Maintaining the current situation, Portugal reserves the right to apply the principle of reciprocity,” he stressed while calling the attention to the fact that “these restrictions are based only on a single criterion, which concerns the number of new daily cases of patients.”

“Portugal has carried out many more tests than most European countries,” in a “prudent and transparent way,” Santos Silva claimed while concluding that “the country is being the victim of its strategy.”

Some countries are basing their risk evaluation solely on the number of new cases reported each day. In recent weeks Portugal has been reporting around 300 new infections a day due to a spate of isolated outbreaks.

In the last 24 hours, Portugal recorded three more fatalities and 375 more cases of infected people. In total, since the beginning of the pandemic, Portugal has registered 38,464 cases, of which 12,460 are active. The number of fatalities rose to a total of 1,527.

Portugal is one of the countries that currently does not bar travelers from other European countries, or Brazil and the United States.

In a press conference today, the Minister of Health, Marta Temido, admitted that they are “having difficulties in breaking new transmission chains.”

The director general of the World Health Organization (WHO), Tedros Adhanom Ghebreyesus, warned this today that the COVID’19 pandemic is accelerating again and that the world is facing entering a new “very dangerous phase.”

Speaking at an online press conference from the organization’s headquarters in Geneva, he said that on Thursday alone another 150,000 new cases of covid-19 infection were reported to WHO, the highest figure so far.

Of that total, “nearly two-thirds” came from the American continent, with many cases also in South Asia and the Middle East, he explained.

“The world is in a very dangerous new phase. Many people are very tired of staying at home, countries want to reopen their societies and economies, but the virus continues to spread quickly, remains deadly, and people remain exposed,” Ghebreyesus warned.