COVID’19: Azores appeal for emergency help within the US community – Portugal 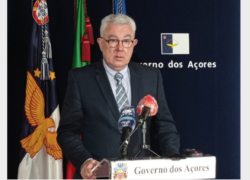 “We must effectively and quickly immunize the population of the Azores, because the situation is beginning to worsen,” Artur Lima stressed in a press conference on Friday.

Following the Central Government decision not to cooperate, the Vice-President of the Government of the Azores, Artur Lima, reiterated that its administration will move forward, and look for support within the Azorean immigrant community in the United States, to get the vaccines delivered to the Azores as soon as possible.

He also stated that the goal is to achieve total immunization against COVID’19 in the Azores, and that all diligences all the channels that exit will be explore with the purpose of defending, above all, the health of the Azorean population. “This is our commitment. That is our mission,” he said.

According to Artur Lima, a letter was sent to Portugal’s Minister of Foreign Affairs, Augusto Santos Silva, on March 22, requesting that “the tools provided for in the Cooperation and Defense Agreement between Portugal and the USA, be activated, with the objective of asking for cooperation in immunizing Azoreans against COVID’19.”

In response, Foreign Affairs Minister Santos Silva argued that there is no “solid legal basis on which the eventual supply of vaccines by the USA can be placed at the level of a formal diligence between States.”

Artur Lima considered the answer “not acceptable” and demonstrative of the Central Government “lack of solidarity” for the Region.

Considering the Central Government lack of action, Artur Lima said he will take the initiative to reach for the Azorean community in the United States, namely their political representatives and their business leaders.

“We are going to sensitize them so that they can intercede within the United States in order to provide vaccines for the Azores, free of charge or eventually paid for,  because the health of the Azorean people is priceless,” he stressed.

Before the request to the Ministry of Foreign Affairs, the President of the Regional Government of the Azores, Jose Bolieiro, also asked the European Commission to increase COVID’19 vaccines to the Azores, under the outermost region status, but also without success. The Commissioner answered that this was a matter “that each of the member states should manage internally,” and that only 2.5% of the overall share of vaccines would be made available to the Azores.

The Government of the Azores is concerned with the increase in cases of COVID’19 infection, mainly of the on the island of São Miguel in recent weeks, and the health resources are very limited where only three of the nine islands have hospitals.

The Azores health authority has administered 66,557 doses of vaccines against covid-19 until April 15 to 46,165 people, of which 20,392 with two doses, which means that 18.7% of the population has already been inoculated with at least one dose of the vaccine. The population of the Azores is estimated at 250 thousand.

The Azores currently have 391 active cases of COVID’19 infections with the new coronavirus that causes the covid-19 disease, of which 372 in São Miguel, 10 in Faial, five in Santa Maria, two on Terceira and one on Flores.

Since the beginning of the pandemic, 4,614 cases have been diagnosed in the region, with 4,082 recoveries and 30 deaths. 68 people left the archipelago without having been cured and 43 presented proof of previous healing.