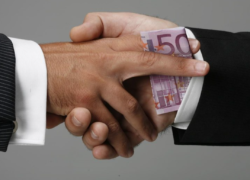 With the lowest score ever, Portugal is now “well below the average figures for Western Europe and the European Union, set at 66 points,” it was reported.

Transparency International (TI), a non-governmental organization (NGO), is present in more than 100 countries, with the mission to take action to combat institutional corruption globally.

For Susana Coroado, the president of the TI branch in Portugal, Transparency International.PT,  “over the last 10 years little or nothing has been done to combat corruption in Portugal, and the results are an expression of that drift”.

According to the Transparency International president, Delia Ferreira Rubio, “Covid-19 is not just an economic and health crisis. It is a crisis of corruption”, which has put governments to the test.  “And it is a crisis that we are failing to manage,” she said.

Since 2012, Portugal has recorded minimal annual variations and TI survey reports ‘that the countries least equipped to deal with crises, such as the Covid-19 pandemic, are precisely those with the lowest scores’.

“In the year of the Covid-19 Pandemic, the results of the 2020 Corruption Perception Index reveal the impact of corruption on health and social protection systems, democratic processes and respect for human rights,” TI-PT, the Portuguese subsidiary concluded.

The Transparency International’s Corruption Perception Index is a tool that measures corruption in the world by analyzing the levels of corruption in the public sector of 180 countries, scoring them from 0 (very corrupt) to 100 (very transparent).

Denmark and New Zealand remain at the top of the 2020 table with 88 points, followed by Finland and Singapore with 85. The lowest positions this year are Syria with 14 points and Somalia and South Sudan both with 12 points.

TI has claimed that Portugal lacks a legal system equipped with the legal tools to combat and regulate corruption at all levels of the public and private sectors and although it is common knowledge that corruption exists, there is no will to change the status quo.