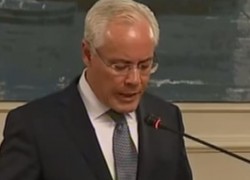 The police raids “Operation Labyrinth” was conducted last week and detained at least 11 senior officials, including the head of the country’s immigration and border service. The raids also included the offices of the Ministry of the Interior, the Ministry of the Environment and the Ministry of Justice. The charges include corruption, influence-peddling, and money laundering.

Among those held were the head of the border police agency SEF Manuel Jarmela Palos, Secretary General of Justice Ministry Maria Antónia Anes, and the head of the Institute of Registries and Notaries António Figueiredo.

In a televised statement, Macedo said he had no involvement in the corruption under investigation and that he was resigning because “the investigation had diminished his authority as minister.” Prime Minister Pedro Passos Coelho has accepted his resignation.

“I have no administrative involvement whatsoever in the attribution of visas […] I have resigned to defend the government” he said.  Although no charges were pressed against Macedo, it was alleged he has close ties to suspect António Figueiredo.

Introduced in 2012, the “golden visa” scheme grants residency to wealthy foreigners who invest at least €600,000 in Portugal. After the initial five years, visa holders may become Portuguese passport holders and thus full citizens of the European Union. It also gives them the right to move around in the Schengen area, which includes nearly all the countries (26) across Europe, except the UK. Spain and some other EU countries have similar programs.

Since its implementation, it is estimated that more than 1,500 of such permits have been issued to foreigners, most of them from China, Russia, Brazil, Angola, South Africa and India. The Chinese by far are the biggest single source of demand for  Portuguese “golden visas” followed by citizens from Russia, Brazil, and Angola. Since its implementation the program has generated over €1bilion.