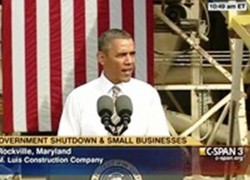 Established in 1985, the $60 million company was co-founded by Portuguese-American entrepreneurs Albertina Luis along with her husband Manuel Luis. In 2008, Albertina and Manuel turned the company’s ownership and management over to their two daughters, Cidalia Luis-Akbar and Natalia Luis, qualifying the M. Luis Construction Co., Inc. as a “woman and minority-owned enterprise.”

During his visit, President Obama emphasized the need for Congress to pass a continuing resolution in order to reopen the government and to raise the debt ceiling so the U.S. can pay its bills. According to the White House, “M. Luis Construction is a local small business that has grown in recent years thanks to increased access to capital through the President’s Small Business Jobs Act and other SBA programs.”

“[…]I also want to give a big thanks to your bosses, Cidalia and Natalia, for being such gracious hosts. I had a chance to meet them at the White House. (Applause.) Thank you. Now I know where they got their good looks from, because I had a chance to meet mom and dad, and their beautiful families. So I’m so glad to be here. And I had a chance to learn a little bit about their story. So when their parents brought them from Portugal to America almost 40 years ago, no one in the family spoke a word of English. But that didn’t stop their father, Manuel, and their mother, Albertina, from having a big dream — believing that if they worked hard, they could get ahead, and that even though they’d never had any schooling, maybe their daughters could go to college; maybe in America you could make it if you tried. That’s what they believed.” Read the full speech

Albertina Luis and Manuel Luis co-founded the company “believing that hard work, dedication and a commitment to excellence” would lead their enterprise to the success it enjoys today.  For over twenty-five years the company has supported city, state, and local government in a broad range of road construction services.

The M. Luis Construction Co., Inc ., is committed to its 250 employees and is dedicated to supporting, small and minority and women-owned businesses.