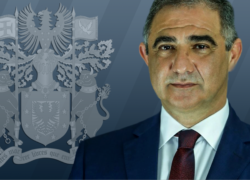 The President of the Regional Government of the Azores, José Manuel Bolieiro, and the Executive Vice-President, Artur Lima, will be visiting Massachusetts and Rhode Island on December 4 and 5, to participate in the celebration of the 30 years of the Casa dos Açores of New England (CANI).

The official visit includes a program of social events and contacts with local community representatives.

On Saturday, President Bolieiro will be meeting with cultural and social association leaders, including business and political leaders in Rhode Island and Massachusetts.

On Sunday, after meeting with representatives of the Portuguese community media, the rest of the day will be dedicated to the celebrations of the 30 years of Casa dos Açores of New England.

CANI was officially founded as the “Rhode Island State House of the Azores” on June 8, 1982, having as its first president former State Senator John Correia.

The institution was created with the aim of providing educational, cultural, and social services to the Azorean immigrant community, as well as strengthening the cultural ties between the community and the Azores.

In 1991, after an eight-year break, Leonardo Oliveira reopened the institution, under the name of Casa dos Açores of New England (CANI). Paulo Bettencourt (1991), became president, followed by José Soares (1993), Mariano Alves (2004) and João Luís Morgado Pacheco (1995 and 2006). Mário Ventura became president in 2010, followed by Nélia Alves-Guimarães, the first woman president of the institution. Francisco Viveiros, the current CANI president, took the leadership in 2018.