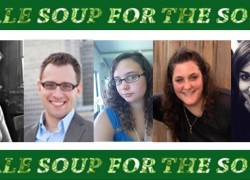 The Kale Soup for the Soul (KSFS) literature events are community presentations by Portuguese-American writers reading work about family, food and culture and sharing stories, experiences and literature.

Carlos J. Queirós completed his MFA at the Iowa Writers’ Workshop as a Graduate Fellow and is currently completing his first novel, a tragicomedy set in his hometown of Newark, NJ. He received an MA in English/Creative Writing from Temple University, where he was a Future Faculty Fellow, and a BA in English/Portuguese from Rutgers College. His work is forthcoming in various anthologies and has appeared in My Generation, AARP The Magazine, AARP VIVA, On Tap Magazine, Críticas Magazine, Library Journal, Forge, The Newark Metro, and other publications. He is a recipient of the Frances Tebet Israel Prize in fiction, a Disquiet International Literary Program award, and was recently invited by the U.S. Embassy in Lisbon to read portions of his novel throughout Portugal (carlosjqueiros.com).

Millicent Borges Accardi, native Californian with New Bedford, MA and Azorean roots, is the author of four poetry collections: Only More So(forthcoming), Practical Love Poems (2015), Injuring Eternity (2010), and Woman on a Shaky Bridge (2010). She is the recipient of fellowships from the National Endowment for the Arts (NEA), Fulbright, CantoMundo, California Arts Council, Fundação Luso-Americana , and the Barbara Deming Foundation (Money for Women). She has been a visiting writer at Keystone College in Scranton, PA; Nimrod Writers Conference at Oklahoma University; The Muse Writers Center in Norfolk, Virginia and the University of Texas at Austin. Her individual poems have appeared in Tampa Review, New Letters, Nimrod, Verdad; Babalonia and Mantis: A Journal of Poetry, Criticism & Translation. She is the founder of the Kale Soup for the Soul series (facebook.com/KaleSoupfortheSoul) .

Marina Carreira is a Luso-American writer from the Ironbound area of Newark, NJ. Her work is featured or forthcoming in The Acentos Review,Naugatuck River Review, Writers of the Portuguese Diaspora: An Anthology, and Paterson Literary Review.  She holds a BA in English from Montclair State University and a MFA in Creative Writing from Rutgers University-Newark. In addition to being an adjunct professor of English at Essex County College and a correspondent for the Luso-Americano newspaper, she is curator and co-host of “Brick City Speaks,” a monthly reading series at Hell’s Kitchen Lounge in Newark, NJ (brickcityspeaks.wordpress.com).

PaulA Neves was born and raised in and around Newark’s Ironbound section and has not yet escaped its gravitational pull. Her most recent work has appeared or is forthcoming in Pilgrimage Magazine, Gávea-Brown Journal, Writers of the Portuguese Diaspora: An Anthology, Luna Luna Magazine, PoetsWest Public Radio, Quiddity International Literary Journal and Public Radio Program and The Waiting Room Reader II. Her work has also appeared in various LGBT publications. She is the recipient of fellowships and scholarships from Canto Mundo, the Luso-American Development Foundation, the Disquiet Literary Program and West Chester Poetry Conference. She holds an MFA in Creative Writing from Rutgers University-Newark and has worked in various wordsmithing capacities, including teaching writing at Rutgers-Newark and Centenary College ( paulaneves.net ).

Maggie Felisberto Is a student in the University of Tampa MFA in Creative Writing program, where she is studying fiction. She earned a Bachelor’s degree in English from Nyack College and is a 2014 and 2011 Disquiet (an International Literary Program in Lisbon) alumnus. Felisberto grew up in Pennsylvania, in a small town where most of her peers thought Portugal was in the Caribbean or South America until they met her. She has lived in provincial Buenos Aires and upstate New York, and she once again lives in rural Pennsylvania. In addition to writing fiction, Maggie blogs about anime, music and literature at maggiefelisberto.wordpress.com.

João S. Martins, born and raised in Manteigas, mainland Portugal, earned his degree at the Catholic University of Lisbon where he dedicated himself to teaching and education. In 1986, he arrived in the United States for a month-long visit, and he ended up relocating to New Jersey with his family. He has published seven books: most recently a bilingual poetry book, ‎Quando Menino Eu Lia. I read as a boy. (BoaVista October, 2014).

Amy Sayre Baptista’s stories have appeared in Alaska Quarterly Review, Ninth Letter, S’ouwester, LUSO American Voices, and Chicago Noir. She is a CantoMundo fellow, a Pushcart Prize nominee, and a scholarship recipient to the Disquiet Literary Festival in Lisbon, Portugal. She has an MFA in fiction from the University of Illinois.

Carlo Matos is a poet, fiction writer, and essayist. He has published four books of poetry and is the recipient of grants from the Illinois Arts Council and FLAD. He is an English professor at the City Colleges of Chicago.

Source: Kale Soup for the Soul