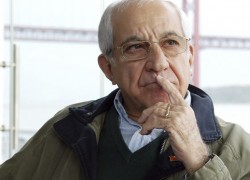 Otelo Saraiva de Carvalho will address the public at the New Bedford Whaling Museum (September 24 at 6:00-7:00pm) and at the Portuguese Studies and Culture at UMass Dartmouth (September 25 at 5:30-7:30pm).

Carvalho is a Portuguese former military and political leader who became one of the main figures of the Movement of the Captains (Movimento dos Capitães) and of the Armed Forces Movement (Movimento das Forças Armadas; MFA) responsible for the “Carnation Revolution” of April 25, 1974. He is considered to be the main strategist of the Revolution that overthrew the dictatorship.

Following the Revolution, Carvalho was part of the National Salvation Junta, a subgroup of the MFA, which filled the political vacuum and governed Portugal after the coup. He was nominated commander of the Comando Operacional do Continente (COPCON), which was set up to secure order and to promote the revolutionary process. In 1975 he became part of the Council of the Revolution and ran for the Presidency of the Republic in 1976 and 1980. In 1980 he became involved with the controversial Forças Populares 25 de Abril (FP25) and served several years in prison before being released in 1989 during an amnesty.

During his visit to the Massachusetts South Coast, Carvalho will participate in a variety of events on UMass Dartmouth campus and in the community.