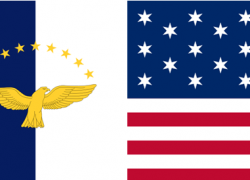 A Massachusetts delegation of about 60 individuals started on Saturday a four-day official visit to São Miguel and Terceira islands in the Azores.

The delegation is headed by Suzanne Bump, representing the State of Massachusetts, Senator Michael Rodrigues and the leaders of the Portuguese American Legislative Caucus, Rep. Marc Pacheco and Rep.Tony Cabral.

The delegation also  includes representatives from the International Caucus on Global Competitiveness of the Commonwealth of Massachusetts and faculty from the University of Massachusetts, Dartmouth.

Established in 1920, the Sahar Hassamain Synagogue is the only surviving Synagogue on the islands and the oldest of Portugal’s remaining synagogues. The recovery project is the culmination of 30 years of efforts to preserve the Jewish legacy in the Azores.

The two sister organizations, the Azorean Jewish Heritage Foundation (USA) and the of Associação Cultural Amigos da Sinagoga de Ponta Delgada (Azores) will meet to address issues relating to the Synagogue renovation project. The signing of an agreement of cooperation between the two associations regarding the project will also take place.

The Azorean-Jewish Heritage Foundation, was formed in Massachusetts presided over  by Gideon Gradman, Treasurer Donald Berube, Secretary Lisa Rosen and directors Paula Raposa, Michael J. Rodrigues, Robert Waxler and Pedro Amaral. Their goal is to support the recovery effort through fundraising in the United States.

The meeting, presided by historian José de Almeida Mello, president of Associação Cultural Amigos da Sinagoga de Ponta Delgada, will have the participation of architect Igor França, in charge of the  details of the renovation work,  and museology expert  Susana Goulart Costa from the University of the Azores.

Last year, the United States informed the Portuguese government that the future of the Lajes Air Field was uncertain and that U.S. Air Force was losing interest in the military facility. Lajes Air Field is the second largest employer on the island, employing about 700 tenured Portuguese workers and nearly 90 short-term workers. The U.S. decision to down size the military outpost will have a significant economic impact over job losses on the island.