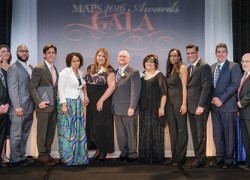 The “Person of the Year Award” went to David Simas, a first-generation Portuguese-American attorney,  from Taunton (MA), who has risen through local and state government positions to become a top advisor to President Barack Obama for the past seven years.

MAPS Executive Director Paulo Pinto, said he knew that Simas would go far since first hearing him advocate for the Portuguese-speaking community more than 20 years ago. “I was inspired right away by his amazing speaking skills,” Pinto told a Gala crowd of 430 guests gathered at the Royal Sonesta Hotel in Cambridge, Massachusetts. 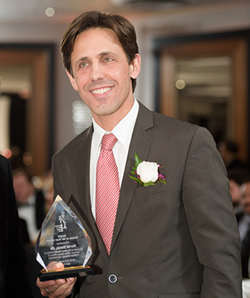 David Simas, Director of the White House Office of Political Strategy and Outreach was awarded the MAPS Person of the Year.

Simas, Director of the White House Office of Political Strategy and Outreach as well as a Presidential advisor, accepted the health and social service provider’s highest annual award from Pinto and MAPS Board President Paula Coutinho, with characteristic humility.

“You understand that, being the son of an immigrant, you don’t do anything by yourself,” he said. “All of us who achieve anything in life do so because we stand on the shoulders of other people who made our lives possible.”

Gala guests gave Simas a standing ovation for his acceptance speech, which closed with a story of flying to Portugal — his parents’ native land — with the President on Air Force One in 2010. On the final day of their visit in Lisbon, President Obama called him to his side after a NATO press conference.

Simas recalled, “He put his arm around me, he walked me to a group of Portuguese reporters in Lisboa, and he said, ‘Ladies and gentlemen of Portugal, I want you to meet a young Portuguese-American advisor. David, say hello to Portugal.’”

A deeply moved Simas spoke briefly to the press, and was seen on TV by relatives in both countries. The President told him on the flight back that he remembered how much it meant to his family when he visited Kenya as a U.S. Senator. Said President Obama, “I wanted you to share that same feeling.”

MAPS also presented awards to four other well-known community members for their years of dedicated service to Portuguese speakers and other immigrants across Massachusetts:

• Aminah Fernandes Pilgrim, Ph.D., from Southeastern Massachusetts, was honored with the MAPS Jorge Fidalgo Community Service Award. Pilgrim, of Cabo Verdean and Caribbean descent, recently took over as Executive Director of CVC UNIDO. She also founded the H.I.P.H.O.P Initiative, which uses Hip Hop to increase media literacy among youth and their families in Greater Boston, and serves as an Assistant Professor of Africana Studies at UMass Boston as well as an affiliated faculty member of the Pedro Pires Institute for Cape Verdean Studies at Bridgewater State University.

• Victor Do Couto, MMHS, of Somerville, received the MAPS Mary & Manuel Rogers Lifetime Community Service Award for more than three decades of public service, including a total of 23 years with MAPS in its various forms. During his tenure, he oversaw major renovations on what later became the MAPS Cambridge Office; greatly expanded MAPS funding and services; opened new offices in Allston/Brighton and Lowell; and successfully advocated for immigrant communities on a variety of issues.

• Lidia Souza of Stoughton received the MAPS Manuel N. Coutinho Outstanding Volunteer Award named after the late Manny Coutinho, a longtime MAPS volunteer who helped hundreds of immigrants prepare to become U.S. citizens. Souza, a Brazilian immigrant, is well-known for volunteering on many social causes and community fundraising campaigns, such as the one to assist young cancer survivor Filipe Wolff. She also recently founded the New England Community Center in Stoughton, which provides educational, cultural, health and social services targeting the Brazilian community.

• Maria Moreira of Lancaster, MA, Executive Director of World Farmers and an Azorean immigrant, was presented with the MAPS Álvaro Lima Outstanding Business Award. World Farmers has provided land, support and technical assistance for many years on agricultural production and marketing to multitudes of immigrant, refugee and historically underserved small farmers from diverse ethnic backgrounds.

Victor Do Couto, an immigrant from the Portuguese Azores, served as Executive Director of the Cambridge Organization of Portuguese Americans (COPA) for many years before leaving in the mid-1980s to complete his Master’s Degree and then work for state government. He returned to lead COPA’s affiliation and subsequent 1993 merger with SPAL, its Somerville counterpart.

“It was the fulfillment of a dream and one of the most treasured moments of my life,” said Do Couto, who continued on as MAPS’ first Executive Director for the next seven years before leaving to pursue other areas of nonprofit and government service. He returned once more for a six-year term on the agency’s Board of Directors until 2012, and retired last year from a director’s position in the state Dept. of Transitional Assistance.

Bob Perry, former MAPS Board President and a longtime friend of Do Couto’s, made a surprise appearance to help Manny Rogers present the service award named after Rogers’ late parents.

“If you ask Victor what is his proudest accomplishment, he says it was laying the foundation for growth of MAPS by finding and training a dedicated staff, stabilizing and increasing funding and laying the infrastructure that has allowed MAPS to flourish and grow,” Perry said. “In a recent conversation, Victor said that he saw himself as a ‘megalomaniac on a mission.’ Well, Victor, we say tonight, ‘Mission Accomplished!’” 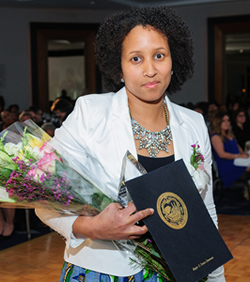 “Dr. Pilgrim is known throughout the Cabo Verdean community as someone who researches issues that matter; cares about people affected by those issues; and takes action to make things better,” said Fidalgo. “And she shares her knowledge and inspiration freely, in many different places.”

Dr. Pilgrim, like the other award recipients, credited her family, forebears and others who came before her for the sacrifices they made to move their immigrant communities forward.

“I’ve been given so much, beginning as a young girl in the Cabo Verdean community of Onset and Wareham,” she said, adding that she hopes the young people of today “never turn away from their community.” 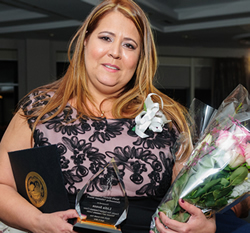 “In the nearly twenty years since she immigrated here from Rio de Janeiro, this dynamic and caring woman has devoted herself to social causes and community fundraising, while working more than full-time, taking classes, and raising three children along with her husband,” Coutinho said.

Souza said that love and charity guided her in her work.

“Being a volunteer is the best thing you can do,” she said in Portuguese.

Maria Moreira said she was truly honored to receive the Outstanding Business Award, which was presented by last year’s recipient, Naveo Credit Union CEO Rui Domingos, on behalf of the Lima Family.

“An entrepreneur since her early twenties, she has been a dairy farmer, a marketing director for farming programs at U-Mass., and above all a wise and generous mentor and teacher,” Domingos said.

Moreira, who arrived in the U.S. with her family as a 12-year-old, told Gala guests that helping others naturally followed her belief that “Whatever you do, good or bad, comes back to you in threes!”

“As an immigrant, you never forget where you came from,” Moreira said in a pre-recorded video about her work that was one of five shown at the Gala about all the award recipients. “You try to help the people that are just recently arrived.”

Executive Director Paulo Pinto and Board President Paula Coutinho congratulated all the honorees and gave special thanks to all the staff, Board members, business sponsors, media sponsors, advertisers, donors, guests and entertainers who made the Gala a great success.

“Tonight, we celebrate the many stars in our community,” said Pinto, referencing the great variety of successful business people and accomplished professional leaders in the room and across the state. “Their talents, drive and passion are immense and the opportunities are endless. And the same is true for MAPS’ clients, who are striving every day to overcome many obstacles as they build healthier and more successful lives — they are perhaps our most magnificent stars, and they shine their light on us every day.”

“We have seen a 30% increase in the first three months of this year, in the number of people coming into our offices to apply for U.S. Citizenship so they can vote in the upcoming general election and protect the future for their families,” he said. “It is imperative that everyone who is eligible to vote exercises that fundamental right and privilege — this November and at every election.”