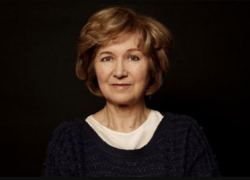 The Department of Spanish and Portuguese Studies is pleased to officially inaugurate the Lídia Jorge Chair in Portuguese Studies on Tuesday, April 5, with the presence of the celebrated writer, who is visiting UMass Amherst for the first time.

Lídia Jorge is one of the most representative writers of the post-Revolution Generation in Portugal. Her books (fiction, theater, children’s literature, essay and poetry) have won international recognition and have been translated into over twenty languages and published in many countries.

“The Lídia Jorge Chair will allow the Portuguese and Brazilian studies program to host academic and cultural events, invite international scholars to campus and promote the Portuguese language and culture in New England,” according to a press release.

The inaugural lecture titled “Lídia Jorge’s Fiction and the Promise of Democracy” will be delivered by Ana Paula Ferreira, professor of Portuguese studies at the University of Minnesota.

Her recent book Women Writing Portuguese Colonialism in Africa traces the agency of women as cultural producers since the end of the nineteenth century and the first decades of the twentieth-first.

Professor Ferreira has written extensively on Portuguese women writers, feminisms and colonialism/postcolonialism. Since the mid-1990s she has published articles and edited a collection of essays on the fiction of Lídia Jorge while also developing a project on the forgotten link between Portuguese women and late empire.

Her recent book Women Writing Portuguese Colonialism in Africa traces the agency of women as cultural producers since the end of the nineteenth century and the first decades of the twentieth-first. The Portuguese Studies program at UMass Amherst is about to get a big boost.

Considered one of Europe’s most influential contemporary writers, novelist Lídia Jorge has captivated international audiences for decades. With the publication of ‘The Wind Whistling in the Cranes’ English-speaking readers can now experience the thrum of her signature poetic style and her delicately braided multicharacter plotlines, and witness the heroic journey of one of the most maddening, and endearing, characters in literary fiction.

Exquisitely translated by Margaret Jull Costa and Annie McDermott, this breathtaking saga, set in the now-distant 1990s, tells the story of the landlords and tenants of a derelict canning factory in southern Portugal.

“The novel moves rhythmically, as if wavering under the blazing sun…This is a thrillingly immersive ‘parable about life, about the struggle between rich and poor, between one race and another.’ Even the trees and surrounding landscape–‘mute figures who, of course, had knowledge and memory’–have their point of view.”
― Anderson Tepper, New York Times Book Review