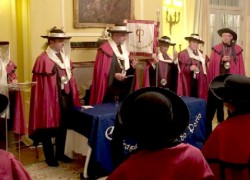 With his soft-spoken demeanor Ambassador Nuno Brito can not only initiate stimulating conversation but also make one feel at home. As His Excellency speaks, the fears of a fast approaching winter recede and one can’t help but notice the picture with beaming smiles of President Barack Obama and Ambassador Brito in the Oval Office, get the conversations going as guests arrive for the Enthronement ceremony by the Port Wine Brotherhood.

The polar vortex is shivering not only Washingtonians

Ambassador of Brazil inducted into the Port Wine Brotherhood

but also some of die-hard Canadians from up north visiting the Nation’s Capital. They are taking cabs instead of walking.

But, if you happen to stand next to a person of Portuguese descent, their hearts will give you a warm feeling. You don’t feel alone and get a feeling as if you have known them all your life; even though you might have met them only a few moments ago one did last evening at the Belgian Ambassador’s residence. With the exchange of few words, one got a virtual tour of Portugal while standing in the elegant diplomatic residence on Foxhall Road.

Algarve, Fatima, Lisbon, Porto and Sintra are thousands of miles from Kalorama Road in Washington but once you enter the magnificent 19th century mansion of the Portuguese Ambassador’s residence, you are technically in Portugal. Historical maps, books and other artifacts remind you of the grandeurs of the past but also the relevance to the world we live in.

This remarkable event was carried out by the traditional act of presenting insignias to 27 notable persons linked to wine culture. The Port Wine Brotherhood was founded 32 years ago in the city of Oporto, Portugal.

Many travelled to Washington for the first time for such a ceremony. Some came from the Portuguese American Community in Sacramento, California. Others came from the farming communities in Iowa.

Chancellor George Thomas David Sandeman presided over the ceremony and was assisted by the four Confrades of the 9th Chancellory. The Enthronement Ceremony proceedings consisted of a traditional greeting, presentation of insignias, signature of the Book of Honor, the oath of loyalty and the traditional toast with Port Wine – for those who consider this beverage to be an elixir of life and the lubricant for great conversations.