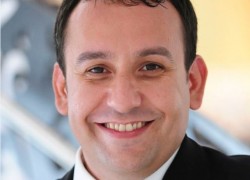 The National Organization of Portuguese Americas (NOPA) is proud to announce the affiliation of Mr. David Batista with its Lusitania Consulting project.

According to Francisco Semião, project director, “As Senior Consultant, Mr. Baptista will provide his expertise to enhance Lusitania Consulting’s capacity to provide businesses and entrepreneurs from Portugal and Portuguese speaking counties with investment procurement and investor relation services, connecting investors who can provide the capital to expand their ventures’ growth and success.”

David Batista, as the Senior Managing Director of Viriathus Holdings and Viriathus Capital, has over 20 years of diversified Wall Street experience as a trader and investment banker. From December 2004 to August 2008, he was a Managing Director at HPC Capital Management and was responsible for their New York Private Capital Markets activities. He was a Vice President of NASDAQ trading at SoundView Technology Group, a technology focused research and trading boutique based in Old Greenwich Connecticut from July 1999 to March 2004. While at SoundView, he was initially responsible for making markets in the semiconductor and semiconductor capital equipment sectors, and later led SoundView’s efforts in non-tech trading by assuming responsibility for the airline, alternative energy, retail, restaurant, and post-secondary education sectors. Prior to joining SoundView, he was a senior NASDAQ trader at JW Charles Securities and its successor JW Genesis Securities in Boca Raton Florida from April 1997 to June 1999. While at JW, he was largely responsible for the firm’s entry into the institutional equities trading arena by leveraging their substantial retail equities order flow. He began his professional career with Lehman Brothers in New York in December 1993 as an investment banking analyst where he worked on numerous mergers & acquisitions and corporate financing activities. He subsequently began his trading career on Lehman’s NASDAQ desk in February 1996. He received a Bachelor of Science Degree in Business Administration with a dual concentration in Finance and International Marketing from C.W. Post College. He is also FINRA Series 7, 24, 55, 63, 79 and 99 registered.