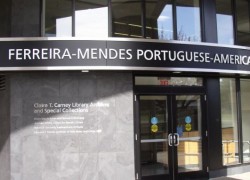 In a prepared statement Chancellor Robert E. Johnson remarked, “the Center will continue to be the nation’s preeminent university-based organization devoted to promoting and sharing the culture of the Lusophone world.”

The Center for Portuguese Studies and Culture, established originally in 1975, is a major component of UMass Dartmouth’s commitment to the study and dissemination of knowledge about Portuguese culture. The Center’s Tagus Press is recognized as a leader in bringing Portuguese literature, history, and culture to an English-speaking audience.

The university is also home to the Ferreira-Mendes Portuguese-American Archives, a comprehensive collection of materials related to the Portuguese-American experience as well as the Department of Portuguese, which oversees undergraduate, masters, and doctoral level academic programs.