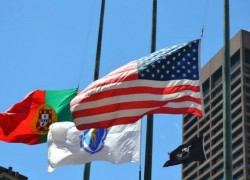 The Portuguese-American community is celebrating “June Month of Portugal” with many celebrations taking place across the country, coast to coast, in at least 12 states.

From New England to California and Hawaii, the celebrations will feature cultural, artistic and popular events.

While Camões has been compared to Shakespeare, Vondel, Homer, Virgil and Dante, his epic poem is considered one the most important works in the Portuguese language and a most relevant world literature reference.

Although officially observed only in Portugal, as a national holiday, Portuguese resident nationals and Portuguese expatriates throughout the world celebrate Day of Portugal as a time to display their national pride and cultural heritage.

In Portugal the official celebrations involve the President, Prime Minister, and other high ranking personalities and includes military parades, cultural events and popular festivities across the country.

In recent years it has become a tradition to split Day of Portugal celebrations between a Portuguese city and a city in a foreign country with a Portuguese connection.

This year the President of Portugal, Marcelo Rebelo de Sousa, announced that the celebrations of the Day of Portugal will begin in the city of Portalegre, mainland Portugal, continuing with celebrations in the country of Cape Verde a former Portuguese colony.

In 2016 the Day of Portugal was celebrated between Lisbon and Paris; in 2017 the celebrations were held in Porto and in the Brazilian cities of Rio de Janeiro and São Paulo; and in 2018 they were divided between Ponta Delgada in the Azores and Boston and Providence, in the United States.

It is estimated that over 5 million Portuguese nationals live abroad, about 1.4 million living in the United States, with a large percentage coming from the Azores.

Presently, there are sizable Portuguese American communities in Massachusetts, Rhode Island, New Jersey, Florida, Louisiana, Nevada, California, and Hawaii. The total resident population of Portugal is estimated at about 10,260,000 (2019).

For information on June Month of Portugal celebrations in your area check your local calendar of events.