June 10: Day of Portugal to be celebrated formally in Ponta Delgada and Boston – Portugal 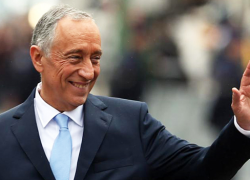 The President of Portugal Marcelo Rebelo de Sousa has announced on the Presidency website that the Day of Portugal will be officially celebrated, on June 10, in the Azores and the United States.

“These celebrations will take place in Ponta Delgada, in the Azores, and in Boston, in the United States of America,” the announcement said.

In the same note the President appointed Onésimo Teotónio de Almeida to preside over the celebrations.

“The President of the Republic decided to appoint Prof. Doctor Onésimo Teotónio de Almeida to preside over the celebrations of the Day of Portugal, Camões and Portuguese Communities this year,” he announced.

Onésimo Teotónio deAlmeida, a native of São Miguel island, in the Azores, is a Full Professor at Brown

University, Providence, Rhode Island. An essayist and author of various books, Professor Almeida is a recipient of various awards, including the “Oficial da Ordem do Infante D. Henrique” by the President of Portugal.