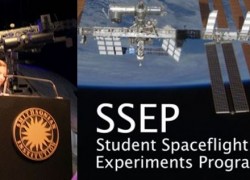 Portuguese American Cecilia Fatima Louro Perez, was recently honored to speak at the Smithsonian National Air and Space Museum as a Finalist of the Student Spaceflight Experiment Program (SSEP).

The SSEP is an international program organized by the National Center for Earth and Space Science exploration (NCESSE) in which students submit experiment proposals to be conducted at the International Space Station (ISS). 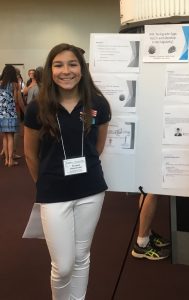 Cecilia was the Lead Investigator of the experiment “Will Tardigrade Eggs Hatch and Develop in Microgravity?” which was one of 30 experiments selected for flight, from over 2000 entries from districts across the United States, Canada and Brazil.

Experiments required that students utilize the FME mini-lab along with specific instructions for astronauts’ interactions with the experiment once aboard the ISS. Similar actions will occur on earth for the ground truth and results compared at a later date.

The two-day SSEP Conference, led by Dr. Jeff Goldstein, allowed the flight finalists to present their experiments to other researchers as well as museum visitors in a format of a professional scientific conference.

The student researchers were permitted early morning access to the museum to watch the 5:41am launch of the Space X Dragon spacecraft on a Falcon 9 rocket along with commentary from NASA.

Cecilia is a Luso descendent from the city of Cantanhede, mainland Portugal, district of Coimbra (maternal) and Ourense, Spain (paternal). She resides with her parents (Sandra DeFatima Louro and Anthony Perez) in Springfield, New Jersey and will be an 8th grader at Florence M. Gaudineer middle school in the Fall. She has attended the Portuguese school for classes in Portuguese language and history.