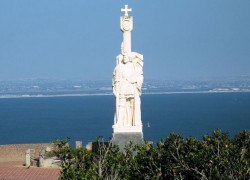 California is celebrating the arrival ashore of Portuguese navigator, João Rodrigues Cabrilho, the first recorded European explorer to reach the West Coast of the United States.

The Cabrillo Festival, featuring the re-enactment of the landing of Cabrilho, has become an annual multicultural celebration of the contributions of Native American, Mexican, Portuguese and Spanish to the history of California. It is estimated that over 1 million Portuguese, most of them of Azorean descent, live in the United States, one third of them in California.

Visitors are invited to enjoy multicultural demonstrations including educational activities, food, music and folk dances. They are also invited to take a journey back in time at the Maritime Museum of San Diego which features a replica of Cabrilho’s 16th century caravel.

According to the San Diego Community Newspaper, a full-size, fully functional and historically accurate $6.2 million replica of Cabrilho’s flagship, San Salvador, is under construction at Spanish Landing Park on Harbor Drive.  Being built for the San Diego Maritime Museum, and near completion, the site of construction is open to the public.