Community: Bob Correia has died at the age of 82 – Fall River, MA 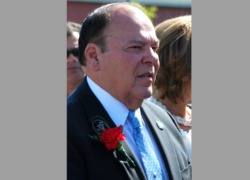 Robert Correia, a longtime member of the Massachusetts Legislature and later the mayor of Fall River, has died at the age of 82. He was House majority whip for six years.

One of the bigger local political figures in the past 50 years, he was a member of the Massachusetts House of Representatives from 1977 to 2008 and served as Fall River’s 41st mayor from January 2008 to January 2010. A one term mayor, he defeated fellow State Rep. David Sullivan. He was defeated in his bid for re-election in 2009.

Correia was the author of several important bills, namely pushing for the issuance of a $10 million bond bill to pay for repairs to the hull of the U.S.S. Massachusetts, and lobbying state officials to locate a Heritage State Park in Fall River. The walkway at the park was dedicated in Correia’s honor in 2018.

“Bob” to all who knew him, was proud of his Portuguese heritage. He was a strong supporter in creating of the Center for Portuguese Studies and Culture (CPSC) at the University of Massachusetts Dartmouth. He was also the driving force behind the creation of the Helio and Amelia Pedroso/FLAD Endowed Chair at the CPSC.

Correia was also a co-founder, more than four decades ago, of the annual Heritage Day of Portugal celebrations at the Statehouse and the Portuguese Heritage Awards initiative, and one of the founders of the Massachusetts Portuguese American Legislative Caucus.

With roots in mainland Portugal, he was born in Fall River, Massachusetts, the son of the late Manuel Correia and the late Mary (Pereira Gomes) Correia.

He was the husband of Patricia (Fogarty) Correia, his high-school sweetheart to whom he was married for sixty years. He is survived by his three loving children, Robert Correia Jr., and his wife, Arlene, Susan A. Correia, both of Fall River and Mark R. Correia of Boston, as well as his grandchildren, Karla Neves (Kevin) and Kristyn Kelly (Eric) and great grandchildren, Ava Neves, Seamus Kelly, and Ella Kelly. Bob’s nieces and nephews include, Michael Fogarty (Melissa), Kathy McLay (Paul), Elizabeth Albee (John), John Horrobin (Virginia), Cindy Horrobin Tengstedt, Thomas Horrobin, Patricia Wing, Michael Horrobin, and Ann Hudson (Nick). Other dear family members include the Moniz and Furtado families, the Gomes/Rapoza families, Pereira/Botelho families and many great nieces and nephews.