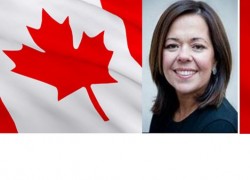 Portuguese-Canadian Ana Paula Lopes has been named one of Canada’s Top 100 Most Powerful Women by the Women’s Executive Network (WXN).

Released annually, these awards celebrate and highlight the professional achievements of women across the country.

Born in Lisbon, Portugal, Lopes has won numerous awards including the Yorktown Humanitarian Award of 2012 and the Association of Fundraising Professionals (AFP) of Greater Toronto, Fundraising Volunteer of the Year in 2009. In 2011, she was named a Member of the Order of Canada in recognition of her outstanding contributions as a volunteer and philanthropist to various arts, education and health care organizations.

She was also one of seven recipients of the Sun Life Financial Arts and Communications Award recognizing her leadership in helping transform Canadian arts and healthcare organizations. As the Chair of the Board, Lopes led the restructuring of the Toronto Symphony Orchestra and its return to financial health. As Chair of Centre for Addiction and Mental Health (CAMH) Foundation, she provides leadership for raising the funds to create one of the world’s most important psychiatric institutions.

WXN Founder Pamela Jeffery says, “The 2013 Top 100 Winners are a testament to the broad range of talent and leadership found in Canada and we believe that by recognizing and sharing the accomplishments of these women, we are encouraging the next generation to reach higher so that one day there will be no ceiling, just possibility.”

This year’s Top 100 Leadership Summit and Awards Gala on December 4 is appropriately themed “What Glass Ceiling?” During the Summit to be held at the Sheraton Centre Toronto, with over 1,100 attendees. The keynote speech will be delivered by Dr. Roberta Bondar, astronaut and neurologist in space aboard NASA’s 1992 space shuttle Discovery.