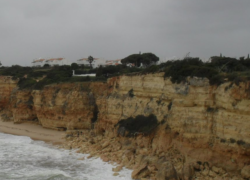 Latest estimates warn that many coastal cities, towns, villages and resorts in mainland Portugal are likely to become increasingly vulnerable to flooding or total destruction by sea levels that are rising far faster than expected.

The latest evaluation of data on rising sea levels has tripled previous estimates of vulnerability in coastal areas around the world.

An analysis published by the international scientific journal Nature Communications predicts that the lives of hundreds of millions of people in low-lying coastal areas could be drastically affected if greenhouse gas emissions are not radically curtailed to prevent global warming increasing to an unmanageable height by 2050.

Even though scientific information is not always correct and remains open to review based on new hard evidence, the latest sea-level predictions are alarming.

They indicate that up to 340 million people are currently living on land below projected flood levels for 2050, and that by the end of the century the number will  have reached 630 million.

It’s being emphasized that translating sea-level projections into potential exposure of populations is critical for coastal planning and for assessing the costs of failure to act.

Scientists say that the rate of sea-level rise has accelerated year after year since the mid-1960s when parts of the world’s oceans began to expand, particularly in the Southern Hemisphere, because of saltwater absorbing more heat.

The average sea-level rise has quickened since the mid-1990s, particularly in the last two decades, probably due to ever-faster ice loss in Greenland and Antarctica.

Another  study, conducted by University of Lisbon researchers, has noted that  hundreds of thousands of people living in coastal areas in mainland Portugal are involved in all sorts of high economic  activities, and that a great many  infrastructures will have to be adapted and protected from extreme storms as well as natural  sea level rise.

To develop climate change adaptation strategies, say the authors of the study, a reliable and accurate assessment of the physical vulnerability to rising sea levels is crucial.

In line with a European Union directive, potential hazards along the coast of mainland Portugal have been evaluated for the years 2025, 2050, and 2100, taking into consideration different sea level scenarios.

The overwhelming scientific evidence seems clear: humanity and many other forms of life on our planet are facing devastation, if not eventual extinction, unless greenhouse gas emissions are severely limited – and soon.

The climate of the world has been changing since the beginning of time, but the global warming that has been intensifying in recent decades is believed to be unprecedented and the cause not only of rising sea levels and flooding, but of extreme  conditions such as ruinous wildfires, storms, heatwaves  and droughts.

Overall, the situation is becoming increasingly complex involving a range of difficult issues for individual countries, including endangered island nations.

Apart from enlightening research work, remarkably little has been achieved since the historic Paris Agreement signed in 2016 to prevent the looming crisis.

The lengthy COP 25 event in Madrid that concluded at the end of last week having achieved little, was the 25th annual climate change conference organized by the United Nations. Substantial disagreements on curbing greenhouse gases remain and it was left to an outspoken sixteen-year-old to denounce pledges by leading political and business leaders as hollow, deceptive and based on “clever accounting and creative PR”.

At least UN Secretary-General and former Portuguese Prime Minister António Guterres seemed to be in harmony with Greta Thunberg and millions of protesting schoolchildren around the world when he told the Madrid conference that the planet is close to “the point of no return”.

Agreement on fully cooperative action, especially among the wealthiest and biggest polluting nations, is expected to be crucial at COP 26, which will be held in November 2020 in Glasgow.