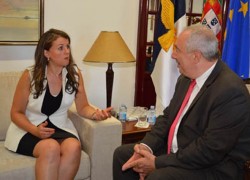 Canadian Federal Member of Parliament, Julie Dzerowicz has encouraged Portuguese women to aspire to fill positions in politics and in corporate boardrooms while on a recent visit to Portugal. The visit also highlighted the relationship between the Azores region and Canada before the implementation of a major free trade agreement between Canada and the European Union.

Speaking to Lusa during an early stop in the Azores Islands, Dzerowicz remarked that the percentage of Canadian women involved in high-level political life is high compared to other countries, including Portugal. She noted that Canada should play a role in seeking ways to inspire and encourage more Portuguese women to pursue advanced business and political roles.

Dzerowicz met with Rui Bettencourt, Assistant Secretary for External Relations of the Government of the Azores. Bettencourt emphasized the importance of deepening ties with Canada through three areas: commerce, such as through the exportation of cheeses and dairy products; regional tourism and diaspora relations.

Dzerowicz also visited mainland Portugal and met with officials in cities including Lisbon and Viseu.

The visit occurred prior to the implementation of the Comprehensive Economic and Trade Agreement (CETA) on September 21, 2017. The free trade agreement between Canada and the European Union introduces major changes to all aspects of trade, including products and services, investment, labor mobility and government procurement.

Discussions for a trade agreement began with a joint study on a partnership in 2007. Formal negotiations started in 2009 and after some delays, the agreement was signed in October 2016. Final ratification occurred February 15, 2017 at the European Parliament. CETA was passed into law in Ottawa with Royal Assent on May 16, 2017.

As a bloc, the European Union is Canada’s second largest trading partner.

Julie Dzerowicz was elected to the federal electoral district of Davenport in Toronto, Ontario in 2015. The riding has one of the country’s highest concentrations of European immigrants, particularly those from Portugal as well as a large number of constituents of Portuguese descent.

Cristina Ogden is a freelance writer and blogger based in Western Canada. She writes on issues concerning the arts and culture of both Portugal and Canada. Her articles, essays and reviews have appeared in journals, anthologies and news sites in Europe and North America