Cardinal of Lisbon foresees the ordination of women – Portugal

Cardinal José da Cruz Policarpo, the Patriarch of Lisbon, was quoted saying that “Theologically there is no fundamental obstacle,” that would preclude women’s ordination in the future and from saying the Mass from the altar, the Vatican Insider reported.

According to the Cardinal of Lisbon, there will be women priests in the future “when God wills.” For the moment it is better “not to raise the issue,” he said.

The Cardinal also said, “I think that there is no fundamental obstacle. It is a fundamental equality of all members of the Church. The problem is a strong tradition that comes from Jesus and from the fact that the churches of the Reformation conceded the priesthood to women.” 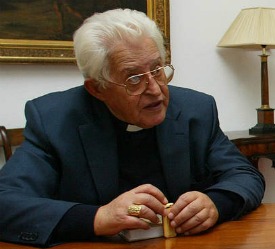 Cardinal Policarpo’s statement is at odds with the teaching of Pope John Paul II in that the Church has no authority to ordain women, and that this judgment reflects the permanent teaching of the Church.

Cardinal Policarpo was appointed coadjutor to the Patriarch of Lisbon in 1997 and succeeded to that title the following year.

He was elevated to the College of Cardinals by Pope John Paul II in 2001. He is now 75 years old, having reached the canonical retirement age in February of this year.