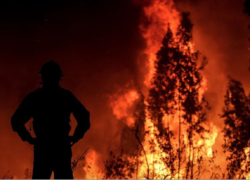 Portugal has been under waves of extreme heat and severe drought, which continues to cause wildfires outbreaks throughout the country.

Starting August 6, intense fires have spread throughout Serra da Estrela, central Portugal, including the municipalities of Guarda, Manteigas and Covilhã.

On Tuesday, the smoke from the huge wildfires in Serra da Estrela enveloped skyscrapers in Madrid 400 km (250 miles) away, in Spain, it was reported.

Serra da Estrela, Portugal’s largest natural protected area, is enduring the largest blaze in the country since 2018, reported the Institute for the Conservation of Nature and Forests.

Serra da Estrela, recognized by UNESCO as a natural park, sits in the heart of a mountain range, which rises to around 2,000 meters.

The 10-day fire has already devastated more than 16,000 hectares, with new outbreaks, causing 26 injuries and widespread panic, forcing the evacuation of several villages. Half of the 10 biggest fires in the last five years have occurred this year.

On Wednesday, the Portuguese Institute of the Sea and Atmosphere (IPMA) warned that the country will experience a third heat wave from August 20 to the end of September, and that the danger of rural fires remains high.

Around 50 municipalities in the interior of the North and Centre, Alto Alentejo and Algarve are currently at maximum risk of fire, namely rural areas in Bragança, Guarda, Castelo Branco, Leiria, Coimbra, Santarém, Portalegre e Faro.

According to the Portuguese Civil Protection Agency, almost 1,700 firefighters were mobilized to combat the high intensity fire, in Serra da Estrela, supported by more than 500 vehicles and 17 aircraft.

Scorching summer temperatures and long periods of no rainfall have resulted in wildfires in many European countries, causing immense devastation across the continent.

The area most affected is the Iberian Peninsula, with Portugal being the third country with the largest burned area. Spanish and Portuguese officials have reported more than 1,700 heat-related deaths.

A provisional balance of fires in the continent this year indicates a new record of more than 660,000 hectares burned.

PAJ/Staff/ This developing story will be updated.