Business: TAP Air Portugal to be sold before the end of the year – Portugal 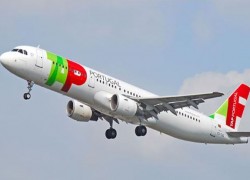 For the second time in two years, Portugal is considering selling TAP Air Portugal. Government sources have said that the re-launch of the airline’s privatization should occur before the end of 2014, “when market conditions are conducive to the success of the operation.”

As reported Thursday, by the Wall Street Journal (WSJ), “Portugal’s government said it had received several expressions of interest” in buying the state run airline.

Portugal’s Transport Secretary, Sergio Monteiro, cited by the WSJ, said the Portuguese government “would sell up to 66% of the company—61% through direct sales to one or more investors and the rest to its 7,500 employees.”

Although no further details were offered by the WSJ about “potential buyers or price,” Portugal’s Economy Minister, Antonio Pires de Lima, said recently that interested parties include Airline Avianca as well as airlines Air Europa and Azul Airlines.

TAP’s privatization is part of the of the €78 billion financial bailout signed by Portugal in 2011 with the European Commission, the International Monetary Fund and the European Central Bank.