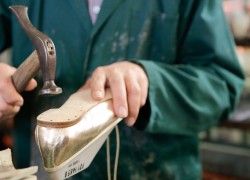 Portugal’s footwear industry is to invest Euro20 million this year and next year in marketing its products abroad, to establish itself as “the most sophisticated in the world.” The goal is to double exports over the next decade.

At a meeting with journalists on Thursday in Porto, the executive director of the industry association, APICCAPS, João Maia, said that 90% of the investment would be spent on international trade fairs.

The promotional actions include improving business communications for its 50 member companies, in order for them to provide them with greater visibility and “a differentiated image.”

The plan is budgeted at Euro1 million a year, with the goal to raise the sector’s profile and doubling exports by 2025 from the 2010 level of Euro1.2 billion. Last year, Portugal’s footwear exports rose 8% to more than Euro1.7 billion, a record value.

Next month alone,, Paulo Gonçalves the association’s communications director noted, the association and its members will be represented at 20 trade fairs around the world, with a view to being in contact with the “more than 100,000 importers” that are likely to be present.

Industry officials say they are optimistic about their chances of securing significant funding for such campaigns from European Union development funds, after receiving Euro55 million between 2007 and 2013.

With 1,696 companies and 41,295 jobs, the footwear industry is one of the country’s most important, exporting 95% of output at an average price of Euro23.45 a pair, behind only Italy.