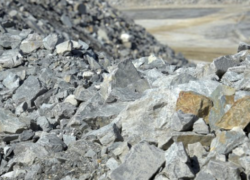 With an initial annual production capacity of up to 35,000 tones of battery-grade lithium hydroxide, the plant will deliver enough to provide batteries for about 700,000 electric vehicles a year. The plant should start operating by the end of 2025.

Portugal is believed to sit on some of Europe’s biggest lithium deposits, a key material in the manufacture of lithium batteries for electric vehicles.

The project called ‘Aurora’ is still looking for a site but protests from environmental groups argue the mines will ruin the countryside, demanding stronger regulation and more transparency.

Most of the prospecting areas are in the northern region of Tras-os-Montes an economically depressed region. The plant will help create up to 1,500 jobs.

Lithium hydroxide conversion is predicted to grow more than tenfold by the end of the decade, as the world shift sto clean energy to fight climate change, and contribute to reducing global CO2 emissions and Europe’s dependence on lithium imports.

Galp Energia, SGPS, S.A. a multinational energy corporation, headquartered in Lisbon, is already one of the biggest solar power generators in Spain and Portugal. Northvolt, which is backed by investors including Goldman Sachs, BMW and Ikea, is the most advanced of a series of battery startups in Europe.