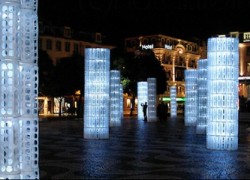 This Christmas the Lisbon City Hall had a very bright and cost effective idea for the season’s street lighting decoration, reports Sonia Ferreira in the Ikea Hackers web blog.

Instead of spending the usual bundle of money in the traditional Christmas lighting, they used inexpensive plastic bag holders to create columns of light all across the Rossio plaza downtown Lisbon.

If you were unfamiliar with the IKEA product line you’d never guess what the above illuminated sculptures are crafted from: Rationell Variera plastic bag holders. That’s right, they’re intended to be lightweight plastic holders for people to stuff their used plastic grocery bags into for future reuse. Tied together and snaked through with LED lighting strands, however, they become abstract illuminated towers.

Normally we see clever IKEA hacks executed by individual tinkers; this hack is a delightfully large scale holiday illumination project on the streets of Lisbon, Portugal.