Book: ‘Writers of the Portuguese Diaspora in the United States and Canada’ – Editor’s Note 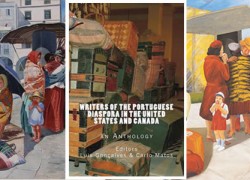 This anthology brings together fiction, poetry, recipes, and memoirs by some of the best Portuguese-Canadian and Portuguese-American writers to narrate the Portuguese Diasporic experience in North America. These works focus on lived experiences, shared spaces and the ethnic identity through which this distinctive culture is lived in the United States of America and Canada, both of which have long been home to significant and vibrant Portuguese communities that arrived roughly in the same waves of migration.

In this book, you will find a range of texts full of passion, wit, and poise, even as they wrestle with a sense of loss about the passing of the torch from generation to generation, the attempts at integration into the mainstream, and the often overlooked third space or otherness often felt by Portuguese-Canadians and Portuguese-Americans. There are also stories about the power gained from the preservation of cultural practices that promote a strong sense of self and strengthen family and community ties, and also the awareness that success can come from understanding one’s legacy.

We would like to emphasize that even though this anthology was compiled from the perspective of the Portuguese Diaspora to North America, the result goes beyond that community and reflects larger complexities of articulations in Canadian and American everyday life and identity that will resonate with people of any ancestry in these countries.

Among the many writers included are Katherine Vaz, George Monteiro, Irene Marques, Anthony Barcellos, August Mark Vaz, Millicent Borges Accardi, Sam Pereira, Darrell Kastin and Frank X. Gaspar. Each of them offers a unique view on the heterogeneity, intricateness, and vibrancy of experiences of the Portuguese Diasporas in Canada and the United States.

Luis Gonçalves holds a Ph.D. in Romance Languages, with a Minor in Communication Studies and a Certification in Cultural Studies, from the University of North Carolina at Chapel Hill. He joined the Spanish and Portuguese Department at Princeton University in Fall 2010. Before joining the department, he coordinated the Portuguese Program and taught language and Cultural Studies courses at Columbia University. Professor Gonçalves specializes in Portuguese-speaking cultures and civilizations and their transatlantic dynamic in the 19th and 20th centuries. His research interests include social movements, literature, popular culture and film from the Portuguese-speaking countries, their identity constructs, Diasporas, migrations and lately also the cultural articulations of the Portuguese-American communities.

Carlo Matos has published eight books of poetry, fiction and nonfiction, including The Secret Correspondence of Loon & Fiasco (Mayapple Press) and It’s Best Not to Interrupt Her Experiments (forthcoming Negative Capability Press). He has also published poems, stories, and essays in Boston Review, Iowa Review, Another Chicago Magazine, Paper Darts, and Handsome, among many others. His books have been reviewed in such places as Boston Review, Iowa Review, and Portuguese-American Journal. Carlo has received grants from the Illinois Arts Council, the Fundação Luso-Americana, and the Sundress Academy for the Arts. He is a winner of the Heartland Poetry Prize from New American Press and the Slash Pine Press Winter Prose Chapbook Contest. He currently lives in Chicago, IL where he is a professor at the City Colleges of Chicago and a teaching artist with the Rooster Moans Poetry Coop. A former fighter, he now trains and coaches cage fighters and kickboxers. After hours he can be found entertaining clients at the Chicago Poetry Bordello and writing poems on demand with Poems While You Wait. Follow him on twitter @CarloMatos46. He blogs at carlomatos.blogspot.com.