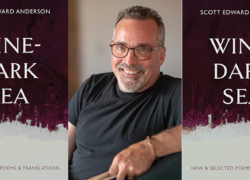 In Wine-Dark Sea: New & Selected Poems & Translations, award-winning poet and translator Scott Edward Anderson brings together a body of over thirty new poems written over the past decade, with older poems that have not appeared in collections before, as well as selections from his earlier works, Fallow Field and 30-Day Poems, the latter previously available only on the Internet. This book also includes a generous sampling of the poet’s translations of poems by important Portuguese poets ranging from Fernando Pessoa and Sophia de Mello Breyner Andresen to Vitorino Nemesio and Angela de Almeida. Wine-Dark Sea gathers in one volume nearly all the poems outside of Anderson’s two book-length sequences, Dwelling: an ecopoem and Azorean Suite/Suite Açoriana, that the poet has published or produced over the past 35 years, demonstrating the precision and range of his poetic vision.

“Scott Edward Anderson’s Wine-Dark Sea is both a summing up of his remarkable journeys in poetry and a setting out on new adventures, where he explores ‘the latitudes of love, / and gravity of longevity.’ From Brooklyn to Indonesia, Alaska to his beloved Azores, he discovers new ways to celebrate the things of the earth, memorialize what remains transitory, and seek those ‘voices, / which you can still hear/ echoing over centuries of stone.'”

“Anderson’s lyric themes are timeless: myth, romantic love, nature, and our search for meaning in the quotidian, but his touch is light. He takes fully to heart Frost’s proposition that a poem ‘begins in delight and ends in wisdom, ‘ making this rich New & Selected both deeply pleasurable and instructive. The generous opening poem alone is intoxicating and evocative . . . ”

“In shorter lyrics, longer meditations, traditional forms, and experimental poems, Anderson aims for the deep dive into a thing . . . he also explores the currents of desire, language, and heritage in a way that is as informed as it is accessible and openly vulnerable. The history, literature, science, and philosophy that layer these poems make this collection a rich and beautiful invitation to consider how our own sense of place and identity informs our relationship with the living world.”

–Derek Sheffield, author of Not for Luck

Scott Edward Anderson is an award-winning poet, memoirist, essayist, and translator. He is the author of Azorean Suite: A poem of the moment/Suite Açoriana: Um poema do momento (Letras Lavadas, 2020); Falling Up: A Memoir of Second Chances (Homebound Publications, 2019), which received the 1st Literary Award of Letras Lavadas in conjunction with PEN Açores; the Nautilus Award-winning Dwelling: an ecopoem (Shanti Arts, 2018); as well as Fallow Field (Aldrich Press, 2013); and Walks in Nature’s Empire (The Countryman Press, 1995). He has been a Concordia Fellow at the Millay Colony for the Arts and received the Nebraska Review Award and Aldrich Emerging Poets Award. His work has appeared in the American Poetry Review, Alaska Quarterly Review, Cimarron Review, The Cortland Review, Many Mountains Moving, Terrain, and the anthologies Dogs Singing (Salmon Poetry, 2011) and The Incredible Sestina Anthology (Write Bloody, 2013), among other publications.

The journey: Scott Edward Anderson at home away from home – Interview