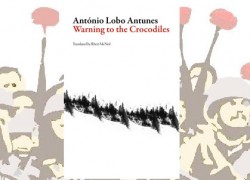 Set in the aftermath of the “Carnation Revolution” of April 25, 1974, Antonio Lobo Antunes’s Warning to the Crocodiles is a fragmented narrative of the violent tensions resulting from major political changes in Portugal.

Told through the memories of four women who spend their days fashioning homemade explosives and participating in the kidnap and torture of communists, the novel details the clandestine activities of an extreme right-wing Salazarist faction resisting the country’s new embrace of democracy.

António Lobo Antunes is a Portuguese novelist and medical doctor specializing in psychiatry. He has been named as a contender for the Nobel Prize in Literature. He serve with the Portuguese Army  taking part in the Portuguese Colonial War (1961–1974). In a military hospital, in Angola, he became interested in the subjects of death and “the other.” The Angolan War of Independence was the subject of many of his novels.  In 1979, Lobo Antunes published his first novel, Memória de Elefante (Elephant’s Memory). His style is considered to be very dense, heavily influenced by William Faulkner and Louis-Ferdinand Céline. He was granted the Grand Cross of the Order of Saint James of the Sword. A list of his novels and other published works is here.

Rhett McNeil is a scholar, critic, and literary translator from Texas, where he graduated Phi Beta Kappa from UT-Austin with degrees in English, Portuguese, and Art History. He has an MA in Comparative Literature from Penn State University and is currently finishing a PhD in the same department, with a doctoral minor in Aesthetics. While at Penn State, he has taught courses in comparative literature, film, Spanish, and Portuguese. His translations include novels and short stories from some of the most innovative and accomplished authors on the world literary scene, including António Lobo Antunes, Enrique Vila-Matas, Gonçalo M. Tavares, João Almino, and A.G. Porta. Rhett also edited and translated a volume of short fiction by the Brazilian master Machado de Assis, who, along with Jorge Luis Borges, is the subject of his dissertation. His translation of Tavares’s Joseph Walser’s Machine was longlisted for the 2013 Best Translated Book Award.