Book: ‘Us and Them’ An American Family – Editor’s Note 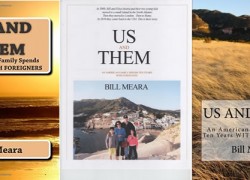 What happens if you take an American family and send them to Europe for ten years? In the summer of 2000, Bill and Elisa Meara, accompanied by 2 year-old Billy and 4 month-old Maria, left their home in the suburbs of Washington, D.C. and moved to the Azores. There they experienced the highs and lows of diplomatic life in a small, isolated corner of the world. After three years in the Azores, they spent four years in glittering London and three years in the beauty of Rome. Overseas they lived in two houses and two apartments, went to five schools, used four different health care systems, experienced one earthquake, 9-11, the terrorist attack on London, tea with the Queen, the election of Barack Obama, and a lot of other events. They lived mostly with the locals, learned Portuguese, Italian, and a bit of Cockney, and made many friends (foreign friends!) They returned to the United States in 2010 with a changed view of the world. This is their story. Bill Meara is a U.S. Foreign Service officer. Before joining the State Department he spent five years in the U.S. Army. Elisa Meara is a garden designer. She was born and raised in the Dominican Republic. Billy and Maria Meara are currently students in Northern Virginia.

Bill Meara, the son of a New York City policeman, studied international affairs and economics at Manhattan College. While a student, he worked as a volunteer English teacher at a Catholic mission school in Huehuetenango, Guatemala. As an army officer, he graduated from Ft. Bragg’s Special Forces and Foreign Area Officer courses and served on active duty in the U.S. Army from 1984 to 1988, attaining the rank of captain. In El Salvador, Bill was one of fifty-five American trainer/advisers assisting in the struggle against the Communist FMLN. After leaving the Army, he joined the U.S. Foreign Service and was sent back to Honduras as special assistant to the U.S. ambassador, serving as one of the embassy’s liaison officers to the Nicaraguan Democratic Resistance (the contras). A career diplomat, Bill went on to serve in Spain’s Basque country, in the Dominican Republic, in the United Kingdom and in Italy. From 2000—2003 he was principal officer and American consul in the Azores islands of Portugal.