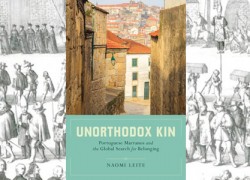 Unorthodox Kin is a groundbreaking exploration of identity, relatedness, and belonging in the context of profound global interconnection.

Naomi Leite paints a poignant and graceful portrait of Portugal’s urban Marranos, who trace their ancestry to fifteenth-century Jews forcibly converted to Catholicism and now seek connection with the Jewish people at large.

Their story raises questions fundamental to the human condition: how people come to identify with far-flung others; how some find glimmerings of mystical connection in a world said to be disenchanted; how identities are lived in practice and challenged in interaction; how the horizons of kinship expand in a globally interconnected era; and how feelings of relatedness emerge between strangers and gather strength over time.

Focusing on mutual imaginings and face-to-face encounters between urban Marranos and the foreign Jewish tourists and outreach workers who travel to meet them, Leite draws on a decade of ethnographic research in Portugal to trace participants’ perceptions of self, peoplehood, and belonging as they evolve through local and global social spaces.

Methodologically innovative and written in a compelling narrative style, Unorthodox Kin is a model study in the anthropology of kinship, tourism, and globalization that will appeal to a wide readership.

Naomi Leite is Lecturer (Assistant Professor) in Social Anthropology and Director of Studies in Anthropology of Travel and Tourism at SOAS, University of London. She studied sociocultural anthropology at the University of California, Berkeley, where she received her B.A., M.A., and Ph.D. Her research engages international tourism as a microcosm for studying cultural consequences of global interconnectivity, particularly among dispersed populations, at various scales of sociality. Her first book, Unorthodox Kin: Portuguese Marranos and the Global Search for Belonging, was published February of 2010 by University of California Press. She is currently editing Taking Tourism Seriously: Edward Bruner and the Anthropology of Tourism, a volume of essays on Bruner’s theoretical legacy in the anthropological study of tourism (Lexington Books). She has also published on theory in the anthropology of tourism, tourism imaginaries, diasporic tourism, heritage and memory, and museums and materiality. She is Co-Convenor of the American Anthropological Association’s Anthropology of Tourism Interest Group and serves on the editorial boards of the Journal of Tourism and Cultural Change, the International Journal of Tourism Anthropology, and Annals of Tourism Research (coordinating editor, Anthropology).