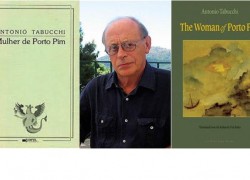 Antonio Tabucchi is one of the most renowned voices in European literature and the foremost Italian writer of his generation. The Woman of Porto Pim is made up of enchanting fragments about the archipelago of the Azores. Told by a visiting Italian writer, himself a collector of the inhabitants’ legends, relics, and histories, the tales include that of a rich married woman’s forbidden love with a humble Azorean fisherman during WWII, and a whaling expedition of eras past. Originally writen in Italian, Donna di Porto Pim (1983), a Portuguese editon, Mulher de Porto Pim, was published in Portugal in 1986.

Antonio Tabucchi was born in Pisa in 1943 and died in 2012 in Lisbon. Translated into more than forty languages, his many books have won prestigious prizes including the Aristeion, the Nossack, and the Europaeischer Staatpreis. His previous fiction includes Little Misunderstandings of No Importance and Indian Nocturne — now a film — which won the Prix Medici Etranger in 1987. Translated from the Italian by Tim Parks.

Tim Parks teaches literary translation at IULM University Milan and has written about provincial life in the Veneto in Italian Neighbours (1992) and An Italian Education (1996). He has translated works by several Italian writers, including Alberto Moravia, Italo Calvino, Antonio Tabucchi and Roberto Calasso. He has twice won the John Florio Prize for translation.