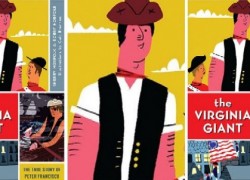 Expressed succinctly, the following template fits to a T the story of the young Peter Francisco, the so-called “Virginia Giant,” as it has come down to us [1].

A child of obscure origins, of unknown birth, is found deserted, speaking an unknown tongue. He grows up to become a hero of great strength and prowess, as well as the possessor of a weapon of magical or near-magical power, one extraordinary in size or appearance, which the hero wields with great efficacy on behalf of this followers, his tribe or people, his king, queen, country or nation. To a greater or less extent he becomes a beau ideal, the cultural cynosure of the populace, who themselves are mere mortals.

That these collected motifs comprise the received pattern for the mythological or folkloric hero should be a shot across the bow of any ship steered by the would-be biographer of Peter Francisco.

Too bad, too, for those who would mythologize the “Virginia Giant” that the mythic aura with its panoply of trappings said to surround Peter Francisco, child and youth, does not follow this hero of the American Revolution into his postwar years, as he grew up into manhood and throughout his allotted days. No longer a figure of mythology, his life must be fleshed out by the biographer as a rather ordinary human being going about ordinary tasks and tribulations, working at several jobs or trades, courting and marrying (twice), and, in his twenties, sitting among grade-school children, struggling to learn to read and write.

The book under review, which purports to separate out fiction and the merely legendry from the facts of biography, doesn’t quite accomplish its stated aim. While it does not take a stand on the doubtful veracity of certain tall tales regarding Peter Francisco’s strength, it does dutifully and scrupulously retell them. Obviously, the authors’ accounts of the more egregiously implausible feats are quarantined toward the end of this rather slender book. But elsewhere, the authors will embroider rather willfully, sometimes irresponsibly. Very early on, in their retelling of the story’s foundational anecdote, the coming up of the abandoned child on a Virginia river wharf, they have the child speak in a tongue that no one there understands but is identified as Portuguese (for which there has never been any documentation what so ever). And, God in heaven, they shamelessly quote what he is purported to have said on the occasion. And to boot, Peter’s Portuguese is pathetically ungrammatical. He is quoted as asking not “Onde estou eu? (Where am I?) but “Onde estão eu” (Where are I?).

Then there’s the matter of the unique sword. Everyone agrees that it has not survived, if, that is, it ever existed in the first place. The Norfolks mention that the Francisco sword they have seen is unremarkably ordinary, presumably of the standard length of the broadsword in common use at the time, hardly the oversized one of legendry. But they will not let go of the possibility that Peter also had a “five foot long broadsword.” While they acknowledge that “its origins are as cloudy” as Peter’s own origin and remain unconvinced that the never-seen oversized sword was a gift from General George Washington or the Marquis de Lafayette, they cannot stop themselves from offering their own theory that “perhaps Peter made the broadsword himself. As a skilled blacksmith,” they explain, “he certainly had the ability, and he may have received permission from his commanding officer to work in the artificers’ huts during the long months at Valley Forge to create a weapon that fitted his size and strength.” Yea, that’s it. That must have been the way it went down.

My own “sword” experience from over a half century ago is that when I visited the home of the Virginia Historical Society on Monument Row, in Richmond, Virginia, and asked to see Peter Francisco’s sword, I was asked point blank, before being shown anything, whether or not I was a member of the Francisco family. When I satisfied him (the assistant curator, I believe) that I was not related to Peter Francisco, he was obviously relieved. “I’ll show you two swords,” he said. The first sword, richly burnished and gleaming, turned out to have belonged to a West Point graduate who fought on the Union side and whose relatives in Virginia, angered at his perfidy in so doing, refused to send it to him then or at any later date. “This sword,” said the librarian, “is the one we show members of the Francisco family.” The second sword, showing considerable rust and, in general, quite a mundane piece, he told me was actually Peter Francisco’s. Neither sword, of course, measures up to the purported of the miraculous sword of Francisco legendry or mythology.

In short, this attempt at writing the “true story of Peter Francisco” contains too many “may have beens” and “must have beens.” Biography should be held to a higher standard.
______________