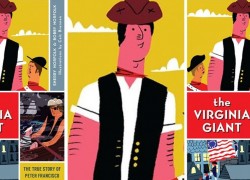 Was he Portuguese? Peter Francisco was believed to have had almost superhuman strength. According to legend, George Washington said, “Without him we would have lost two crucial battles, perhaps the war, and with it our freedom.” Francisco, kidnapped and abandoned by pirates at the age of five, was raised outside Richmond, and after hearing Patrick Henry’s “Give Me Liberty or Give Me Death” speech, he joined the Virginia Colonial Militia. He was known for his battle-hardened skills, and his bravery at Brandywine, Stony Point, Camden and Guilford Courthouse led to stories of epic proportions. Join authors Sherry and Bobby Norfolk as they separate fact from myth on topics ranging from pirates to redcoats to exciting acts of valor in this remarkable story of a true American hero.

Bobby Norfolk is an internationally acclaimed story performer and teaching artist. He is a three-time Emmy Award winner and is one of the most popular and dynamic story-educators in the country. Bobby has created over ten albums and co-authored eight children’s titles. He has won the Parents’ Choice Gold Award, the National Circle of Excellence Oracle Award and was a board member of the National Storytelling Network. He founded Folktale Productions.

Sherry Norfolk is an internationally acclaimed storyteller and teaching artist, leading residencies and professional development workshops across the country. She has co-authored publications on integrating learning through storytelling as well as six picture books. She has received the National Storytelling Oracle Award, the Tennessee Arts Commission’s Outstanding Teaching Artist Award and was chosen for the first National Seminar for Teaching Artists.