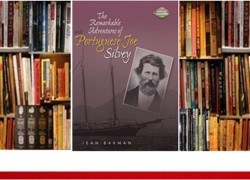 Born on Pico Island, of Portugal’s Azores Islands, sometime between 1830 and 1840, Joseph Silvey began whaling when he was just 12 years old. In 1860, when Silvey came to the British Columbia coast on a whaling schooner, he decided to jump ship to try his hand at gold-mining.

From harpooning whales in small open rowboats, to serving up liquor to rambunctious millworkers, to being the first man to have a seine license in BC, Silvey was the Renaissance man of his generation. His friends were many, and included saloon keeper Gassy Jack Deighton for whom Vancouver’s Gastown is named, his prestigious grandfather-in-law Chief Kiapilano (of the Capilano Nation) and a remittance man who liked to wear either his wife’s clothes or none at all.

Although Portuguese Joe and his family prospered – he had 11 children with two wives and his many descendants still populate the BC coast – they also had their share of grief. Joe’s first wife Khaltinaht died after a few short years of marriage; his eldest child Elizabeth was later kidnapped and forced to marry against her will; and his sixth child John was murdered in a rowboat while on his way to buy clams.

Jean Barman is the author of ten previous books, including the bestseller The Remarkable Adventures of Portuguese Joe Silvey and winner of the 2006 City of Vancouver Book Prize, Stanley Park’s Secret. Barman’s longtime, impassioned pursuit to understand and uncover the history of British Columbia has earned her a position as a Fellow of the Royal Society of Canada, among other honours.  Barman brings to life the story of Portuguese Joe – the romance, the tragedy, and the adventure – with skill, piecing together interviews with Silvey’s descendants, archival records and historical photographs to build an intriguing and entertaining portrait of Joseph Silvey, his family, and the time and place in which he lived.