Book: ‘The Portuguese-Speaking Diaspora: Seven Centuries of Literature and the Arts’ – Editor’s Note 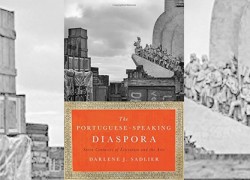 Long before the concept of “globalization,” the Portuguese constructed a vast empire that extended into Africa, India, Brazil, and mid-Atlantic territories, as well as parts of China, Southeast Asia, and Japan. Using this empire as its starting point and spanning seven centuries and four continents, The Portuguese-Speaking Diaspora examines literary and artistic works about the ensuing diaspora, or the dispersion of people within the Portuguese-speaking world, resulting from colonization, the slave trade, adventure seeking, religious conversion, political exile, forced labor, war, economic migration, and tourism.

Based on a broad array of written and visual materials, including historiography, letters, memoirs, plays, poetry, fiction, cartographic imagery, paintings, photographs, and films, The Portuguese-Speaking Diaspora is the first detailed analysis of the different and sometimes conflicting cultural productions of the imperial diaspora in its heyday and an important context for understanding the more complex and broader-based culture of population travel and displacement from the former colonies to present-day “homelands.”

The topics that Darlene J. Sadlier discusses include exploration and settlement by the Portuguese in different parts of the empire; the Black Atlantic slave trade; nineteenth-century travel and Orientalist imaginings; the colonial wars; and the return of populations to Portugal following African independence. A wide-ranging study of the art and literature of these and other diasporic movements, this book is a major contribution to the growing field of Lusophone studies.

Darlene J. Sadlier is professor emerita of Spanish and Portuguese at Indiana University Bloomington. Her previous books include, among others: Americans All: Good Neighbor Cultural Diplomacy in World War II and Brazil Imagined: 1500 to the Present.