Book: The Green and Purple Skin of the World – by Paulo da Costa – Review 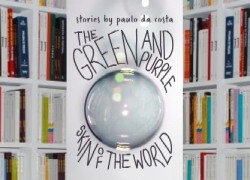 The book’s title evokes a metaphor of bruised skin, the purple of the initial hematoma gradually fading to livid green as the damaged area recovers. In many of these stories characters have been hurt, some of them struggling to change their lives, others overwhelmed and failing. The pain of living in poverty, or with serious illness, or trying to cope with family differences and lost love, is further complicated by characters unable to reach others through language or touch. These stories reveal that human damage is not always visible and healing is a difficult process. Throughout the title story colors resonate. A woman writes letters to her beloved in Canada, having returned to Portugal to visit her father and the family graves. With “memories three generations deep” and the erosion of her mother tongue keeping her isolated, the letters count down the days to her return flight. Her descriptions of growing up in the country and her childhood pleasure of blowing bubbles in the sunlight are links to her past.

When she receives word from Canada that her lover has left her, the bubbles with their easily broken “blues, greens and purples” inspire her meditation on loss, betrayal, and the fragility of love. She considers purple the heaviest color: the dark-skinned grapes of the family orchard she must leave. Green is the new grass in the terraced fields of the birthplace now foreign to her. Da Costa’s prose in this story, whose character feels that “language wraps the world in a thin, temporary veil,” verges on poetry and invites rereading for the pleasure of its lyricism. In these stories language is more a barrier for the characters than a veil. The language they use to engage with others is steeped in their customary ways of dealing with the world when they try to disentangle their flawed histories to confront present urgencies. The tensions of lives in transformation are subtle yet memorable. In “Breathless,” a terminally ill woman transcends her fear and isolation in a hospice, where she learns to accept time through the wordless language of her breathing. Time figures in each story, as does mortality, and the differences between generations in families, where each member clings to their own version of reality.

A tradition of storytelling is significant in da Costa’s work. His previous book, The Scent of a Lie, blended the genres of novel-in-parts with stories that shared places and characters, set in a traditional rural Portugal in an era of landowners and peasants, legends and superstitions. Some stories in The Green and Purple Skin of the World have similar settings in more recent times, with old customs breaking down and only an aura of folktale remaining. The two old men in the first story, “Flies,” maintain there is “nothing like the old days,” while their grandsons, longing to escape the past, view their elders as “poor old geezers” and a nuisance, like “the inevitability of flies.” In “Another Sunday,” a male allegiance to soccer dominates a father’s relationship with his young son. “Blackbird,” a small fable about a caged creature and a rift between old ways of life and the visions of youth, effectively echoes a moment in the title story. Some of the stories are dark. The tragic injustice in “Love and Medical Miracles” and the menace lurking in “My Real Mother Would Never” are mitigated by da Costa’s use of first-person point of view shifting from one character and scene to another, and succeed in arousing compassion. The interior monologues in “Not Written in Pencil,” where a veneer of tolerance explodes into an act of violence, and the bitterness of a seriously ill man locked inside his prejudices in “An Abundance of Flowers,” permit seeing such lives in other than black and white. The inevitability of human suffering is portrayed compassionately, and not without moments of humor to balance the tension.

A couple of the shorter stories—the futuristic “Vivaldi’s Spring” and the war story, “Hells’ Hell”—stand somewhat apart from the tenor of the others with their unusual and somber settings, and seem more like sketches for possible longer pieces. The longest story, “Those Who Follow,” fully grips the imagination. Here, the viewpoint shifts between a cougar and an expert tracker on Canada’s west coast. Da Costa’s sensitivity to both creatures caught in the transition from wilderness to the press of civilization captures our human contradictions: how “we stare at the truth…and then…follow the wrong trail.”

(*) Norma Lundberg is a Saskatchewanian transplant from teaching/researching art for young people, gallery curating, Craft Council organization and writing. After drifting across the pond for a few years, she set roots in Ontario for post-graduate studies in library science morphing into women’s studies. All the while exploring other languages, filling a drawer with short and long fiction writings. Essays and book reviews (Resources for Feminist Research, Atlantis, Matriart, ARC Poetry Review, Malahat Review, Craft Factor) published. Prairie meadowlarks replaced by the voices of poets in Toronto’s rich writing environment.

This review first appeared in The Malahat Review . Reprinted with permission.