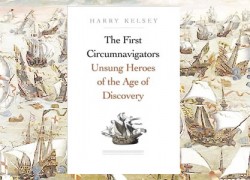 Harry Kelsey, a research scholar at the Huntington Library, uses his research of voyage chronicles and other documents to piece together a narrative of the first few global circumnavigations as well as brief sketches of the mariners who made those journeys. Fernão Magalhães (aka Ferdinand Magellan) and his companion Enrique, an enslaved Malaccan, are given their due as the first circumnavigators; their westward voyage began in September 1519. Dozens of other mariners are named, including those from Magellan’s expedition, other expeditions commissioned by the Spanish crown, and later English voyages helmed by Francis Drake and Thomas Cavendish. After Magellan, perhaps the most historically important of these men were the chroniclers of these expeditions, such as Antonio Pigafetta, who traveled with Magellan, and Andrés de Urdaneta, who served as a page in the 1525 journey of Fray García Jofre de Loaísa and held other more important posts in later fleets. There is little romanticism or embellishment in Kelsey’s spare work; he describes heroism, often of simple dogged determination, but also mutinies, death by starvation and disease, and ships lost at sea. Kelsey provides as much information as possible about all of the participants in these journeys and manages to keep it interesting.

On his review, Iris Engstrand, of the University of San Diego wrote: — “This book is a thorough and well-written narrative based upon the original journals of early seamen who circumnavigated the globe. Harry Kelsey has put life into the men who sailed on these voyages, detailing the hardships they suffered, the food they ate, the dangers they faced, the natives they met, and the fights they had. In sum, much that goes beyond popular accounts to explain the remarkable and daring accomplishments of sixteenth-century explorers who searched the world for riches—both real and imagined—are contained in these pages.”

Harry Kelsey is the former chief curator of history at the Natural History Museum of Los Angeles County and a research scholar at the Huntington Library and the author of several acclaimed biographies of sixteenth-century explorers, including Sir Francis Drake: The Queen’s Pirate. He is also the author of The Doctrina and Confesionario of Juan Cortes, Frontier Capitalist: The Life of John Evans and a biography of California famous Portuguese navigator Juan Rodriguez Cabrillo. He lives in Altadena, CA.