Book: The Dabneys: A Bostonian Family in the Azores – Launching 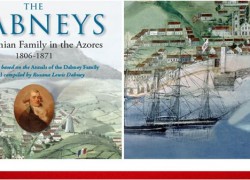 The launching of the anthology “The Dabneys: A Bostonian Family in the Azores 1806-1871,” will take place in a series of events to be held, February 16-21, in four Massachusetts and Rhode Island institutions.

The anthology, based on translations of records originally compiled by Roxana Lewis in 1899, was privately published for the family as “The Dabney Annals”, depicting the Dabneys’ family stay on Faial island.

The English translation is edited and prefaced by Maria Filomena Mónica, University of Lisbon Professor, with annotations and selection by Paulo Silveira e Sousa.

The Dabney family settled on Faial island after John Bass Dabney (1766-1826), a merchant and importer shipping from France to the U.S., moved there for business reasons and served as the first U.S. consul in the Azores from 1806 to 1826.

Diplomats and traders, the Dabneys were among the first Bostonian families to settle on Faial, where they maintained an enduring relationship between New England and the Azores and played a relevant role in the diplomatic relations between the United States and Portugal.

The second event will take place Tuesday, February 19, at 6:00pm, at the Providence Athenaeum, 251 Benefit Street, Providence, RI, sponsored by the Department of Portuguese and Brazilian Studies, Brown University.

The events, celebrating the legacy of friendship between Portugal and the United States, are sponsored by the Luso-American Development Foundation represented at the occasions by Member of the Executive Council, Mário Mesquita. All the events are free and open to the public.