Book: ‘The Arthur of the Iberians’ – Editor’s Note 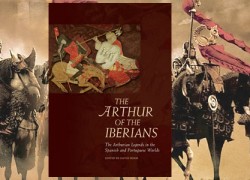 Though we think of King Arthur as archetypically British, the spread of the Arthurian legends was international, extending, among other places, to the Iberian Peninsula, where they had a deep influence and inspired such literary works as the chivalric romances parodied by Cervantes in Don Quixote. Iberia was also the conduit through which these legends travelled to the Americas. The Arthur of the Iberians explores not only medieval and Renaissance texts, but also modern Arthurian fiction, the global spread of the legends in the Portuguese and Spanish worlds, and the social impacts of Arthur and the Round Table through adoption of names and imitation of the practices narrated in the legends.

This book fills the Iberian linguistic and geographical gap in Arthurian studies, replacing the now-outdated work by William J. Entwistle (1925). It covers Arthurian material in all the major Peninsular Romance languages (Spanish, Portuguese, Catalan, Galician); it follows the spread of Arthurian material overseas with the seaborne expansion of Portugal and Spain from Iberia into America and Asia in the fifteenth and sixteenth centuries; and, as well as examining the specifically Arthurian texts themselves, it traces the continued influence of the medieval Arthurian material and its impact on the society, literature and culture of the Golden Age and beyond, including its presence in Don Quixote, the influential Galician Arthurian-inspired romance Amadís de Gaula, and in Spanish ballads. Such was its influence that we find an indigenous American woman called ‘Iseo’ (Iseult); and an Arthurian story appeared in an indigenous language of the Philippines, Tagalog, as late as the nineteenth and early twentieth centuries.

David Hook is an Associate Director of Dr Juan-Carlos Conde’s Magdalen Medieval Iberian Studies Seminar (for which he edits the ‘Manuscript News’ sections of its website) and a Faculty Research Fellow at Oxford since June 2011. He is one of the co-ordinators of the ‘Translations in Transnational Contexts’ interdisciplinary research network. A volume of essays in his honour was published by the Hispanic Seminary of Medieval Studies, New York, in November 2013.