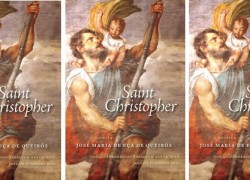 Set in the Middle Ages but written in the early twentieth century, Eça de Queirós’s novella, Saint Christopher, is a powerful indictment of those who profess the value of morality but who do not practice it. The narrative is just as relevant today—when issues of religion, hypocrisy, and social justice are more urgent than ever—as it was when it first appeared in 1912. Written as though it were the product of a dialogue between Jesus and Proudhon (whose theories animate much of the narrative), Saint Christopher challenges today’s ethically motivated reader to do what the narrative’s protagonist does, that is, take up the cause of the wretched and abused of this earth.

José Maria Eça de Queirós (1845–1900) is Portugal’s foremost author of the nineteenth century and its most celebrated novelist before José Saramago. He is the author of The Maias, The Relic, and The Correspondence of Fradique Mendes, among many others works of fiction.

Gregory Rabassa, born March 9, 1922, in Yonkers, New York, is an American translator who was largely responsible for bringing the fiction of contemporary Latin America to the English-speaking public. Of his more than 30 translations from the Spanish and the Portuguese, perhaps the best known is Gabriel García Márquez’s One Hundred Years of Solitude (1970). García Márquez later declared Rabassa’s translation to be superior to his own Spanish original.

Foreword by Carlos Reis, an azorean by birth, he lives in Coimbra since 1968 , when he joined the Faculdade de Letras, University of Coimbra where he graduated in Romance Philology . He dedicated his academic career to lecturing Portuguese Literature , Spanish Literature and Literary Theory at his alma mater. He published his first book in 1975, Estatuto e perspectivas do narrador na ficção de Eça de Queirós, beginning a series of studies on the work of Eça de Queirós to which he dedicated himself. With a dissertation on O discurso ideológico do neo-realismo português, obtained his doctorate in 1983. Over the years, has been visiting professor at several universities, including Santiago de Compostela, Rio de Janeiro, Salamanca, Hamburg, Wisconsin-Madison and Massachusetts-Dartmouth , and regularly teaches Portuguese Literature courses in universities of Brazil. In 1988 was one of the founders of the Universidade Aberta, in Portugal, where he became the rector. In addition to having created a chair of Queirós Studies at the University of Coimbra , Carlos Reis coordinates the Critical Edition of Eça de Queirós works in publishing by the Imprensa Nacional-Casa da Moeda.