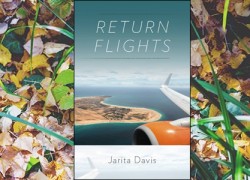 These poems — varying from narrative to imagist to lyrical — reflect the “sodade” of Cape Verdean culture that is shaped by separation and longing — longing for the home that has been left behind and for loved ones who have departed. Cape Verdean communities extend beyond national boundaries and are paradoxically independent of place, even when inspired by it. Return Flights marks a turning point for Cape Verdean American culture, one in which a partially forgotten past becomes a starting point for possible futures, both of new transoceanic contacts and of new reinventions of culture.

“Jarita Davis’s poems work an uncanny spell on the reader. Her language is fully contoured to form the seamless parade of images, lush and deep, that bring this book to life. When one finishes Return Flights, he or she will emerge with salt air in the lungs and Island sun in the eyes. There is a wealth in this book that is rare. This poet takes you out of your world and into another so deftly, so beautifully, you will feel as though you have lived in each one of these poems.”—Frank X. Gaspar

Jarita Davis is a poet and fiction writer with a BA in classics from Brown University and an MA and a PhD from the University of Louisiana, Lafayette. She was the writer in residence at the Nantucket Historical Association and has received fellowships from the Mellon Mayes program, Cave Canem, Hedgebrook, and the Disquiet International Literary Program in Lisbon. Her work has appeared in the Southwestern Review, Historic Nantucket, Cave Canem Anthologies, Crab Orchard Review, Plainsongs, Tuesday: An Art Project, Verdad Magazine, and the Cape Cod Poetry Review. She lives and writes in West Falmouth, Massachusetts.